Catastrophists unite!  We’ve been hiking and exploring the sights around Grand Coulee, and in doing so we’ve become believers in catastrophism as it relates to the creation of the Grand Coulee.  A self taught geologist named Harley (J. Harlan) Bretz in the 1920’s came up with the idea that the massive scale of the coulees, the scab-lands, the wide-ranging disbursement of boulders and moraines, and the rippled land forms could only have been created by catastrophic floods.  It took many years and the arrival of aerial photography and satellite imagery to get anyone to take him seriously, but his ideas were finally vindicated.  In 1979, at age 96, Bretz received the Penrose Medal, geology’s highest honor. He later reportedly told his son: “All my enemies are dead, so I have no one to gloat over”.

I was born in Omak, which is only about 50 miles from the coulees of eastern Washington, yet I still had to do some googling to learn the definition of a coulee.  I’ll make it easier for you though; “As a geological term, coulee means a ravine or deep gully, usually dry, which has been cut by water”.  In this area the water that cut the Grand Coulee is on a scale that is mind boggling.  We stood on the top of Dry Falls looking down the cliffs into the gorge and tried to imagine the flood waters from an ice dam bursting far upstream that swept water 300’ over our heads at a speed of 60 mph.  Yes, I guess that would carve some coulees!  I won’t delve into all the details, but if you’re interested you can google it for yourself; it’s fascinating history!  We’ve been ooh-ing and ahh-ing for the past week as we’ve hiked through Northrup Canyon, toured the dam, and camped along the shores of Banks Lake and Roosevelt Lake, and driven through miles and miles of rippling wheat fields high above the Columbia.

Driving along the Columbia

Can you find the bees nest? 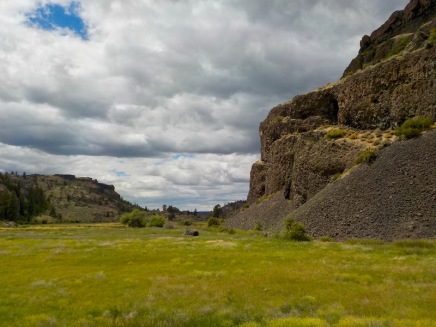 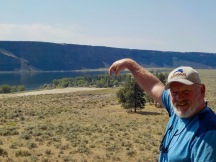 Our campsite is right there! 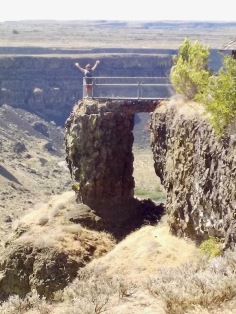 Standing above the gorge at Dry Falls

When I was little my friends and I would build dams in the gutters to create lakes and rapids for our leaf boats to float down so I guess it’s only natural that I should be captivated by the massive scale of Grand Coulee Dam.  It’s one of the largest concrete structures in the world; 550 feet above the bedrock, and 500 feet wide at its base.  It’s beautiful, functional, it put 1,000’s of people to work in the depression, it continues to provide clean electricity to millions, it provides irrigation over an area the size of Delaware, and it provides flood control.

Built by hand in the depression

Reading plaques..it’s what we do! 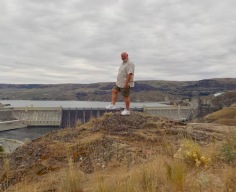 King of the dam

Huge..when I was a kid we got to walk down there… 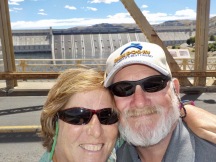 The once mighty Columbia 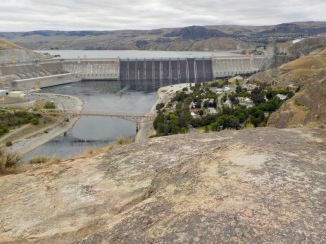 All that being said, I’m still a tree-hugger at heart and I tend to sympathize with the cultures of those who came before us, so my heart is saddened by the loss of the salmon run and the destruction of the Indian culture that depended on it.  Yet, here I sit on the edge of Lake Roosevelt enjoying the view out our door, watching the fishing boats and house boats on the lake.  It’s the old “betterment for the masses at the cost of a few”, but sometimes one has to wonder and take stock of the sacrifices of those “few”.

We’re learning the art of camping in our new little land yacht, and we’re now moving east toward the mountains of Montana, Wyoming, and Colorado.  Along the way we always seem to gravitate toward the water, whether it be a river, lake, or creek.  We’ve stayed at “Bob’s Lakeside Hideaway”, my brother’s property on Lake Osooyos, where we had a great visit with my brother.  We got to pound a few nails and drink some margaritas with my sister who lives on the other side of the lake in the house she and her husband are building.  From there we moved on to a campground in Grand Coulee, right above the dam, and then went to nearby Steamboat Rock, a gorgeous State Park on Banks Lake, which is a reservoir created from water piped up the hill behind Grand Coulee Dam.  Now we’re about 100 miles further north on Lake Roosevelt, enjoying the mountains and pine trees around Kettle Falls.  Marty is learning how to relax (he’s a slow learner), and I’m loving the smell of pine trees and sage.  It’s just another version of our floating happy dance!

Marty learning to relax, while powering the land yacht 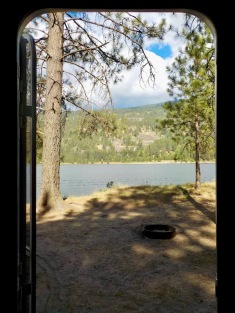 The view from the Murph