It’s hard to believe that it’s been five years since we pushed off the dock in Anacortes to sail toward beautiful destinations and new adventures, and we’ve enjoyed plenty of both as we’ve traveled the Pacific Coast from Alaska to Central America.  We’re now in El Salvador and from all that we’ve seen so far, we’re going to love it here!  Before we regale you with tales from our new home, here’s a bit on how we got here!

Our trip down the coast from Huatulco to Chiapas, to El Salvador was long and mostly uneventful, interspersed with long line dodging, turtle counting (123!), freighter traffic, gusty winds, and sleepless nights.

Love all the fresh foods…

The Saturday market in Huatulco 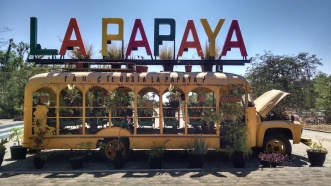 Crossing the Gulf of Tehuantepec was mostly easy with the exception of some strong onshore winds and opposing current that made for a very lumpy sea as we crossed the shipping lanes at Salina Cruz after sunset.  This is adjacent to the Bahia Ventosa (Windy Bay) where the Tehuantepec gap winds funnel from the Gulf of Mexico through a 75-mile wide gap in the Sierra Madres, creating gale force winds and huge seas.  Thankfully for us, the winds were blowing in the opposite direction as we crossed so although it was rough, it wasn’t a Tehuantepecer!

Since the winds were blowing onshore and the seas were getting rougher as we approached shallower water, we decided to head out into deeper water on a more direct route to Chiapas.  After changing course, we were able to sail on a broad reach with the waves abeam, doing 8+ knots using only our small inner jib.

We arrived at Chiapas at 0300, surfed into the channel on the incoming swell, then Marty went out on the bow with flashlight in hand to light the buoys and mangroves and keep us off the shoals.  The channel is fairly well-marked but narrows as you make the final turn down an unlit lane into the marina.  A friendly marina worker was waiting at the dock to point us to the right slip and help us get settled.  We slept for a few hours, then woke at 0700 to greet the Capitania de Puerto who arrived with the Navy, complete with guns and a search dog.  Welcome to Chiapas! 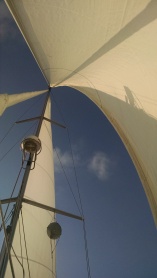 We rested up, did some provisioning in the big stores in Tapachula and kept an eye on the weather forecasts.  After a few days we had another good weather window for the final leg to El Salvador, so it was time…time to schedule our Zarpe Day!

Leaving Mexico by car or by airplane is a very simple affair; leaving by boat is another story!  We were very glad that the Marina provides such great assistance in getting our official clearance paperwork, the Zarpe.

There are four steps in the Zarpe dance with each step in a different office dealing with a different government entity.  All of them include plenty of paperwork, fees to be paid, lots of waiting, and then…the official stamp, and we’re free to leave the country!  It’s kind of a bittersweet feeling as we have loved our time in Mexico, but after four years we felt it was time to explore new territory.  The fifth and final step is completed on board when the Navy and the Port Captain inspect the boat and your paperwork one more time.  After they are finished you have 15 minutes to shove off and leave the marina….adios Mexico! 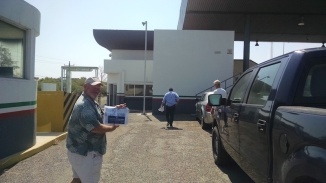 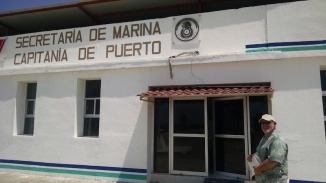 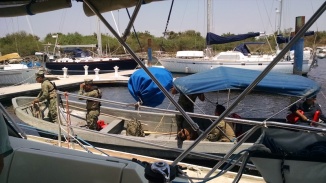 Final inspection by the Navy 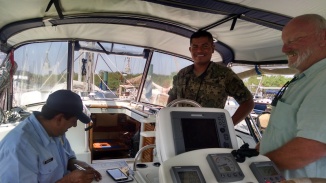 …and the Port Captain…then off we go!

The trip from Chiapas to El Salvador was another easy one; the hardest part was simply trying to stay awake on watch!  We had to slow down quite a bit to time our arrival with high tide, and even at that we were five hours early, so we anchored off the beach outside the bar entrance at dawn and went below to snooze for a few hours.  Then it was 1230 and time to weigh anchor!

We met the pilot boat at the GPS coordinates we’d been given, he instructed us to line up with the entrance, then wait, wait, wait…now gun it!  Off we went with Happy Dance moving at full speed.  The bar entrance was quite flat for us and was actually a bit anti-climactic after worrying about it for so long!  We surfed a couple of small waves, and then voila, we were over the bar and entering Bahia del Sol. 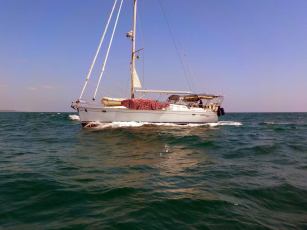 Surfing on a flat day.. 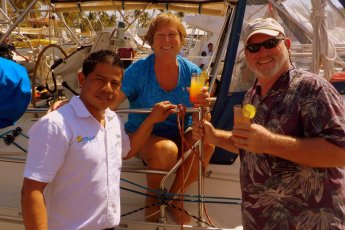 We turned left, motored up the wide estuary to the marina where a crowd of cruisers, officials, and dock workers were waiting for us.  With plenty of hands to tie us to the rickety dock we were then handed a welcome drink, and a welcome gift of Flor de Cana rum!  Next stop was an air-conditioned office to meet with the Port Captain and Immigration Officer.  Pretty soon our passports were stamped, and we were officially welcomed to El Salvador.  Yay!  Time to hoist the new courtesy flag!  From what we’ve seen and enjoyed so far, we know we’ll love it here in El Salvador.  Stay tuned for more details about our new home!