We seem to have found ourselves in the middle of a town meeting of the Nomadic Retiree Cruising Community, with a “mayor” and everything! On any given day in beautiful Bahia Tenacatita there are 25 to 35 boats bobbing on the gentle swell wrapping around Punta Hermanos, with the self-appointed mayor planning activities for the agenda deprived vagabonds.

Bahia Tenacatita is a great anchorage, with protection from the prevalent winter northwesterly on the ocean as well as from the rollers that can be heard crashing onshore a few miles to the east. Occasionally the wind will blow from the south and enter the bay, making for a lumpy night’s sleep, but lately it’s been calm and flat – a cruiser’s paradise.

We’ve been here off and on for nearly a month (most of which I don’t remember because I was asleep) and this week we’ve been enjoying all that this little slice of paradise has to offer!

One day we joined up with a couple of friends for a dinghy excursion up the Estero Verde, a two-mile trip through a thick mangrove forest that leads to a lagoon next to the fishing village of Tenacatita. We’ve been told that there are crocodiles in the narrow river leading to the lagoon, but on our trip we saw herons, egrets, hawks, lots of unnamed birds, and the brightest green lizard I’ve ever seen!

When we arrived in Tenacatita we tied the dinghies to a palm tree and walked across the narrow sandy peninsula into town. There has been some sort of land title grab/recovery going on in the village in the past few years so that most of the palapas are now gone that used to line the beach, but we were still able to find a spot for an awesome lunch of fresh fish and cold cervezas before dinghy-ing back down the narrow jungle trail to Happy Dance. 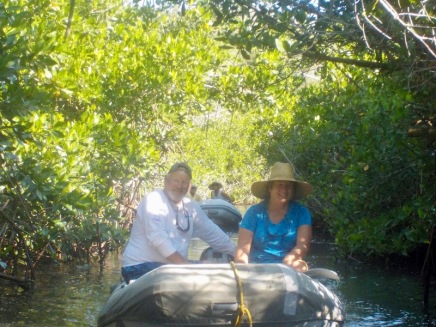 Dinghy ride through the mangroves 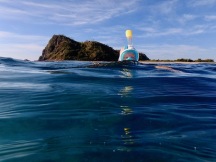 Snorkeling at the acquarium

Only our footsteps this morning…

Heading back into the anchorage

Another day we took the dingy around the point to the same little village, but this time we were headed for a little beach known as the aquarium, named for all the gazillions of baby fish growing up in the protected reefs surrounding the beach. We pulled the dinghy up on the sand, enjoyed a cup of morning coffee on the empty beach, then donned our snorkel gear to go check out the reef. It lived up to it’s reputation, and we were immediately surrounded by a school of silvery bait fish, then lots of other little guys hiding in the nooks and crannies of the reef. A few eels poked their heads out, and there were plenty of urchins and other pokey looking creatures making for a colorful undersea world.

We are anchored in a little nook at the end of the bay where the estuary enters the bay. The snorkeling right near the boat has been exceptional and one day I even swam with a baby turtle for a good 10 minutes or so. He was only about 14-15 inches in length, but he was so curious about me that he just swam around me, it was awesome! We’ve also had dolphins coming over and scratching themselves on our anchor chain, or swimming around munching on the gazillions of bait fish under the boat. Some whales have also ventured close in to give us a show, making a triple crown of our favorite sea creatures!

Happy Dance in front of the beachside palapa 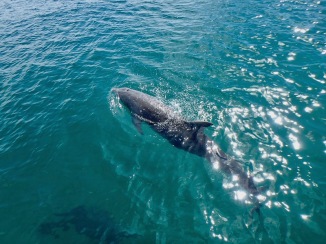 Dolphins scratching on the anchor chain

Then there are the aforementioned activities organized by the mayor. On Friday nights everyone gathers together in their dinghies for a raft-up to share snacks and stories, and learn a bit about each other. Sometimes we’re lucky enough to have a musician serenade us, too. Every afternoon there is a swim to the beach, followed by bocce ball or walks on the beach, then everyone gathers in the palapa to tell stories and enjoy a cold beverage under the palms.

It’s all very casual, and is a great way for cruisers to get together who might simply pass each other coming and going. However, anyone who knows us knows that crowds are definitely not our thing and we’re not good at getting to know new people in social situations, but we’ve been joining in some of the scheduled events or as Marty says; “we’ve been drinking the mayor’s Kool-Aid”. 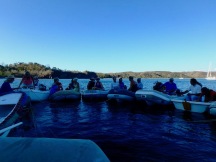 It’s an interesting gathering of many different types of people; young and young at heart, social butterflies and recluses, retired and working, those who live aboard full-time and those who have a limited amount of time, rich and not as rich, artists and executives, free spirits and type A’s.  The one commonality is that we’re all sailing the same sea, enjoying the beauty and freedom of this unique lifestyle in whatever method each person chooses.

Tenacatita has been a fun stop and we’ve been glad to make some new friends and see yet another side of the cruising lifestyle.  We’ll soon be weighing anchor when the next weather window appears for us to head south, where we’ll be exploring some new territory.  New adventures await!

Calm sea in the anchorage following a brief rain