These past few weeks we’ve been having fun sharing our favorite places with family and friends, so now we’ve been finding a few new adventures.  We’ll be sure to add these to our list of “must-do’s” when we have visitors next year.

We rented a car with our friends Ken and Sheri from s/v Cake while we were all in Puerto Escondido so that we could provision, refill propane tanks, etc., etc., and decided that while we had wheels we should explore!  Since none of us had been up into the mountains above Loreto to see the mission at San Javier, we decided it was the perfect day trip.

After a tasty hamburger lunch at El Barracho, we headed uphill – really uphill – into the mountains.  Lucky for us, the road to San Javier is now all paved except where water crosses in some areas, turning a punishing two-and-a-half-hour marathon into a relatively easy ride that can be completed in less than an hour.  It’s only a 22 mile drive, and between the spectacular scenery, steep grades and dizzying hairpin curves, there’s definitely no need to rush. 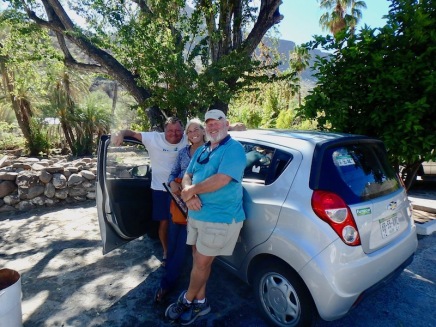 Our Spark…yep we all fit and even had room for provisions!

HIstoric dams and aqueducts along the rivers 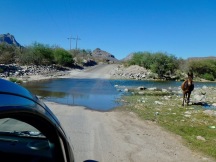 Vaca enjoying the view of the Sea of Cortez

San Javier is a tiny village with a cobbled main street (the only street?) that leads straight to the mission and is set against a backdrop of high rugged mountains.  The Mission was founded by the Jesuits in 1699, led by Father Francisco María Piccolo.  The Jesuits built aqueducts and dams, harvested timber, and an interesting factoid for this sailor is that timber collected from areas north of the mission was used in the construction of the first ship ever built in the Californias, the famous El Triunfo de la Cruz.

The church is in surprisingly good condition and rising behind the altar is one of three retablos (I learned a new word..!) covered in gold leaf from Spain, featuring 18th-century oil paintings and a statue of San Javier.  With the surrounding mountains, the quaint town, and the church itself built from huge quarried stones, it’s all quite stunning. 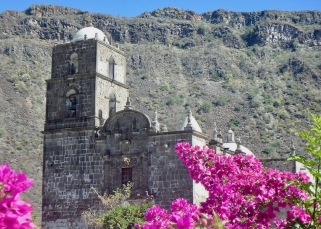 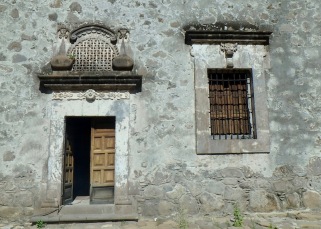 The interior and the gold leafed altar

Then of course there is the filming of the telenovela (Spanish soap opera) the day we visited!  What a riot.  When we arrived in San Javier we could see there was a large crowd around the church and flowers outlining the door, so we thought we had stumbled onto a midweek wedding.  Then we noticed all the cameras, the drone flying overhead, and the townspeople standing around ready to clap or cheer on queue.  As it turned out, they were filming a wedding scene for a telenovela, and the entire town had turned out to be the extras.  So much for quietly wandering through the historic church!  We watched for a bit, and wandered around when they weren’t filming, so it was still fun to see. 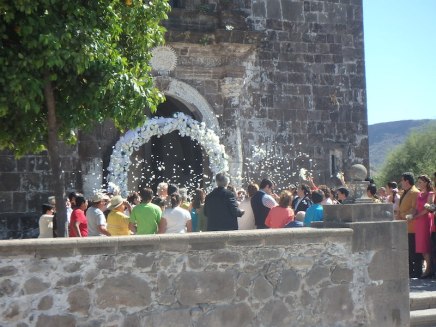 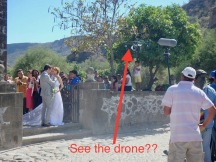 …being dusted with dirt by the drone..ha! 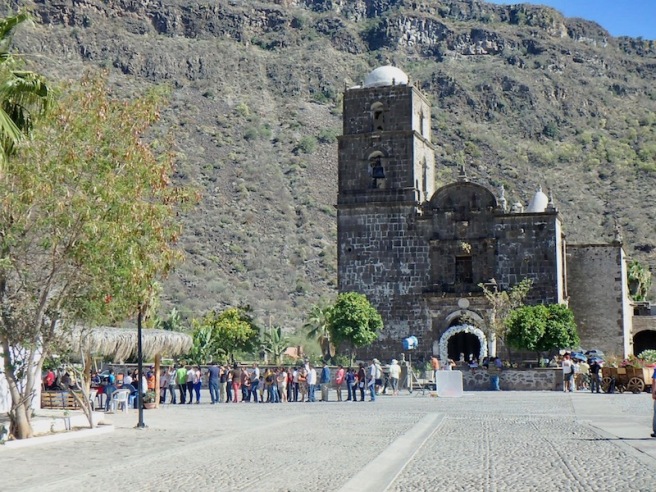 Time for the extras to be paid!

Our next adventure was a trip to a secluded oasis with plenty of shade, great snorkeling, fantastic views of the area, and a great walking beach.  We loaded up the dinghy with a picnic lunch, our chairs, books and snorkel gear, and made a day of it.  We enjoyed some of the best snorkeling we’ve had so far this year, floating in and out of the shallow reefs and over the steep underwater cliffs.  What a great day!

We’re off for an adventure! 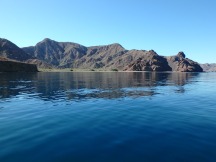 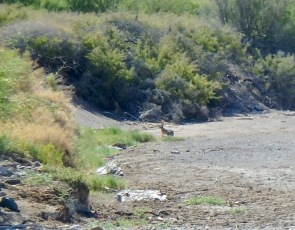 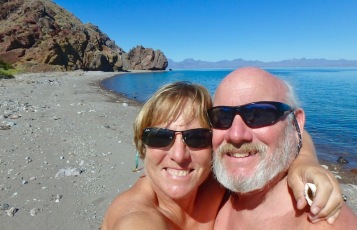 Ambling on the beach 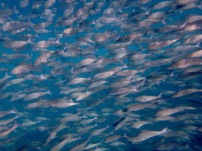 A whole bunch of somethings! 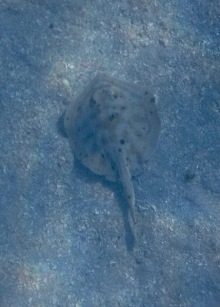 Some kind of ray

Another short adventure was seeing a Desert Bighorn Sheep up close and personal!  A ram had come down the ridge to the beach area and went into a cave to enjoy the cool shade.  He was absolutely gorgeous and quite majestic!  We floated for awhile watching him and he didn’t seem to mind our presence, but when we started the engine to leave he got up to go too.  We felt bad for having disturbed him, but it was spectacular to see him standing there watching us.  These pictures are taken with a telephoto, so please don’t think we were this close!

Enjoying the shade on a hot day

Off to the mountains

I always thought it was odd that Bighorn Sheep were on the island, but then I read more about why they are here and it’s actually pretty interesting.  The sheep were relocated to Isla Carmen in 1995 as a program to help increase the overall population of sheep in Baja California.  They originally brought over two sets of 13 sheep, and in 2009 there were estimated to be about 450 on the island, so at that time they’d relocated over 65 animals.  This type of a conservation program requires that there also be a harvesting program in place and in 2005 the Mexican government started issuing a controlled number of tags each year, and there is a hunting lodge that is in operation in Bahia Salinas.  Hopefully the relocations are continuing successfully, as these guys are gorgeous!

So there you have it, our latest and greatest adventures.  We’re adding new anchorages to our list of favorites, learning more about the area, and we hope to share more of our slice of paradise with stowaways in the coming years!