When we last posted we were lying at anchor in Bahia Falsa, just north of La Paz, in the state of Baja California Sur. Since then we’ve traveled south from the Sea of Cortez to Banderas Bay on the Pacific Coast of Mexico.

I’ve lost count of how many times we’ve made the 300+ mile trek between the Baja and the mainland, but each trip is always different. This one was fun in that we buddy-boated for the first time. We left Bahia de Los Muertos before dawn, and a few hours behind our early rising friends on Cake. We finally caught up to them around noon and then continued the next two days and nights within a mile of each other. It was nice to look over in the darkness and see their navigation lights, and to share sightings of turtles, dolphins, and the occasional confusion of lighted long lines and shrimpers as we closed in on Isla Isabel. 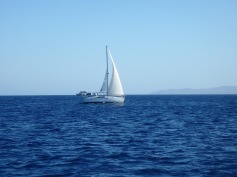 Muertos to Matanchen, then to Punta de Mita

This passage was an easy one, and we were able to steer the rhumb line the entire way. We sailed much of the first day on a bit of a beam swell, then the wind died and we ended up motoring the second day on smooth seas, with the current pushing us so that we made great time. We arrived in Ensenada de Matanchen at sunrise, dropped the hook, popped an anchor beer and hit the sack!

Sunset behind the palms

The next day the forecast was for NW wind 9-11, so we planned for an easy run to Chacala. NOT! After rounding the first point to change course to Chacala, a dark blue line of off shore easterly wind, 20+ knots with gusts in the high 20’s hit us across the beam. We had been motor sailing with our full main out, so we turned into the wind, reefed the main, and then rolled out the staysail so that we wouldn’t be overpowered by the gusts. Even with such a conservative sail set, the mast was pumping like crazy and the rigging was shaking. It was a bumpy ride with the northern swell opposing the offshore wind waves, but we were still making good time under sail.

Cruising is all about making plans and changing them and this day was no different. It didn’t seem like Chacala would be the best anchorage with the swell running, so we decided to press on to Punta de Mita. With hindsight we should have just anchored and ridden it out in Chacala or Bahia de Jaltemba, but that’s after the fact. The wind started veering to the south, right on our nose, so we furled the headsail and motor-sailed close to the wind with the mainsail giving us an extra push. That was fine, but the sea state was messy to say the least, with large square rollers coming from 3 directions, and none of them in our favor! We took a bit of water over the deck, and even over the paddleboards a few times, but it wasn’t anything worrisome, just uncomfortable. Cake was a few miles behind us taking the same waves as we both pounded into the wind. We pulled around the corner into Punta de Mita as the sun was setting so that we could see the large surf breaking on the point. Cake arrived an hour behind us in the dark so we got on the radio and flashed our beacon to help them make sense of all the lights in the anchorage while they found a spot to drop the hook.   Another example of an expected easy passage that turned into something quite different!

We stayed in Punta de Mita a couple of days, enjoying the sun and the sand, then headed to the marina in La Cruz where we slept to the sounds of the squeaking and stretching of our dock lines as Happy Dance gently danced with the tide. La Cruz de Huanacaxtle is one of our favorite spots, situated on the Pacific Ocean’s Bahía de Banderas in the state of Nayarit, just north of Puerto Vallarta, which is in the state of Jalisco. While here we’ll do some provisioning, eat lots of fresh fish and shrimp, check off a few things on the to do list, enjoy the local music and restaurant scene and meet up with lots of friends, old and new! 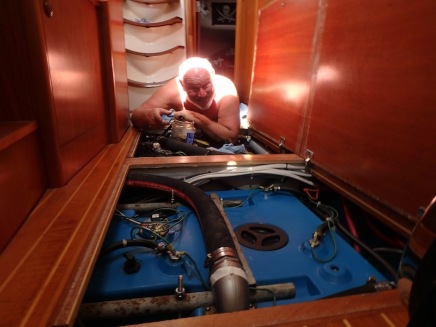 Our neighbors on Cake paddling home after a day of cards

The one big item on our to do list is obviously to resolve our engine issues. Marty spent an entire day with his head in the bilge pulling fuel lines, blowing them out to make sure they were clear, re-attaching and checking connections. Marty was one with all things fuel! The mystery was still there though, as no lines were blocked or letting air in. A new friend that we’d met at a local get together, was Alan on Kemo Sabe, and he knew a thing or two about diesel engines. He was nice enough to come over to peruse the issue with Marty and they came up with a working theory that we’ve since put to the test by running out to Punta de Mita and trying to start the engine while it was hot, then cool. The test has potentially validated the theory, which is…

There is a part in the engine called the Internal Fuel Control Lever that shuts the fuel off when we press the kill switch at the helm.  When the engine is hot we think this switch is not resetting itself to let fuel pass through again so the engine won’t start. When we put a fan on the engine to cool the area where this switch is, the engine starts!  This seems to be our work around, since that lever is buried inside the fuel pump assembly, which means lots of mess to get it out and checked!  That’s the next area of research; to see if the fuel pump can be removed and worked on here in La Cruz.

So there you have it, Engine Woes Part III, or the Mystery of the Missing Fuel. With a working work-around, we’ve now moved down the to do list to anchor chain. We need new anchor chain to replace the rusty pile in the anchor locker. Think of buying 4 new tires with fancy rims, that’s what anchor chain will set you back. And here’s your trivia question for the day; how much does 300’ of 5/16” chain weigh? If you figure it out will you come and carry it to the boat for us?

We’ve also passed a big milestone this month; we’ve lived on board Happy Dance for 4 years now, and we’ve put over 13,000 statute miles under the keel. Ahhh, life afloat; rocking at anchor enjoying paradise, and doing boat chores in exotic places. Later today, we’ll probably polish something, paddleboard to shore, watch the surfers, or take a walk on the beach, followed by some sunset watching. It’s a tough life, but I’m glad it’s ours!

3 thoughts on “Milestones and Maintenance, or Engine Woes Part III”