Morning coffee in the cockpit is a daily ritual on Happy Dance. While the coffee is perking we’ll pull in our email hoping for news from home (hint, hint), listen to the daily weather report via SSB, and maybe join in on a local radio net on the VHF depending on our location. Once the coffee is ready we head out to watch the day unfold. The anchorage is quiet and as Happy Dance floats around her anchor we get a 360-degree view of our surroundings.

This morning we find ourselves in Caleta Partida, a favorite anchorage that sits inside the crater of an extinct volcano, and is actually set between two separate islands that are nearly connected by a narrow winding passage running east to west. The steep red and pink cliffs that encircle the main portion of the bay are full of caves and crazy rock formations. The northern end of the bay is shallow, filled in with white silt and sand that shows off the aqua marine color of the water. There are rays practicing their quadruple flips, pelicans splooshing into the water for breakfast, vultures creating shadows on the cliffs, oystercatchers noisily chasing each other along the shore, and frigates silently floating high above us.

We’ve been here nearly a week now, enjoying our last days on the hook before we “head to the barn”. Summer is coming and that means that the double H’s are on their way; hurricanes and heat! We had intended to sail down to Banderas Bay and spend the summer months in La Cruz on the mainland side, but as they say; plans are written in the sand at low tide! We’ve now decided to stay in Marina de La Paz for a few months, while we hunker down for hurricane season and do some LOL (Labors of Love) on our Happy Dance homestead. We’ll be traveling north of the fence to visit family and friends, renew Visas, gather more treasures and replacement parts, and enjoy the good life! It’s a theme you know, this permanent picnic is something that we are so incredibly thankful for.

These past six months in the Sea felt a bit like a farewell tour because our current plan is to leave the Sea of Cortez in 2017 and head further south to Costa Rica and Panama. As you may have noticed though, our plans are somewhat liquid, so where we actually end up remains to be seen!

Since our last post from Bahia San Juanico, we’ve been enjoying a slow ride south through a few of our favorite anchorages. We stopped for fuel and propane in Puerto Escondido, then planned (that “P” word again…) to head to Agua Verde for a few days. As we rounded Punta Candeleros, trying to sail in some fluky winds, our radio lit up with a call from Ken and Sheri on Cake! What a great surprise to hear their smiley voices calling us. As it turns out they saw our rather distinctive solent rig in the distance heading south as they were heading north and thought it might be us! We did a quick U-turn, back through the channel, and rendezvoused in Los Candeleros. What a treat to drop anchor next to our buddies!

We spent a couple of days in Candeleros sharing laughs and catching up on the news with Cake, and getting to know new friends Marne and Brett on Leahona. One day we all snorkeled around the boats in about 10’ of water trying to fill our bags with chocolate clams, but the bay was filled with a dense almost muddy bottom that made it very hard to dig out the clams. With little to show for our effort other than lots of jellyfish stings, we soon gave that up. Marne persisted though since she had a wet suit and weight belt, and won the hunter gatherer award, collecting a bag of the larger white clams usually reserved for chowder. I cleaned them all and handed the clam meat off to the chefs’ onboard Cake who turned them into yummy clam fritters! It was a team effort for a fantastic feast and lots of fun.

The next morning when the wind started piping up from the east, we all weighed anchor and headed back out the channel for the short sail north to Bahia Marquer.  It was a beautiful sight to see our three boats sailing north between Isla Carmen and Isla Danzante with white sails shining in the sun.

After getting settled on course the deck crew on Happy Dance decided it was time to “loose the goose”! We furled the Genoa and then Marty headed to the foredeck to rig the Genaker. He soon gave me the thumbs up that he was ready, so with the autopilot set, I began hauling in the sheet  while Marty raised the sock to the top of the mast, and whoosh, the goose is full! Happy Dance picks up and flies as soon as the wind fills the sail; you can actually feel the hull lift and surge forward, it’s awesome. 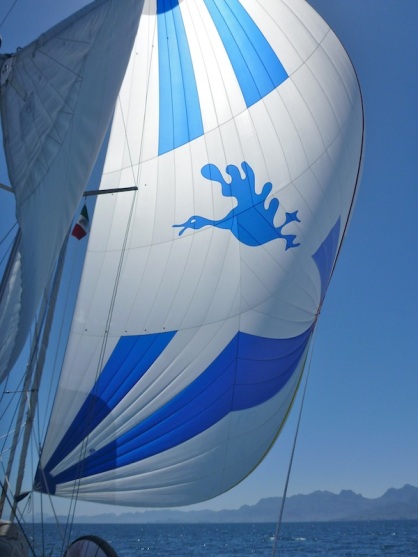 With the wind directly on our beam it was a tough angle for the Genaker, so we furled the mainsail and managed to keep the leading edge of the sail flying, as Happy Dance did the quick step through the waves.  As we entered the channel the funnel effect caused the wind to build a bit and start blowing a bit more forward of the beam, so that we were having to alter course and point toward the island in order to keep the sail from collapsing. Pretty soon it was apparent that we weren’t going to clear the point, so Yep, time to douse the sail! Down came the goose, and out came the Genoa. We didn’t bother rolling out the mainsail since we only had a few miles to go, and we were already doing 7 knots with headsail alone, in a gusty 15-18 knots of breeze. A fun day of sailing!

We pulled into the lee of Carmen Island and set the anchor in 18’ of beautiful aquamarine water set against the white sand beach and beautiful yellow cliffs of Bahia Marquer. We all gathered on Happy Dance for happy hour and some more laughs. The rays put on quite a show and we enjoyed a red sunset over the Sierra Gigantes and Loreto.

The next morning it was time for a paddle to shore with the girls and a walk on the beach, then sadly we all weighed anchor and headed separate directions. The one great thing about cruising is meeting up with friends along the way, and that’s the one tough part about cruising too – heading off in different directions! We know we’ll run across our friends again though, so no worries. 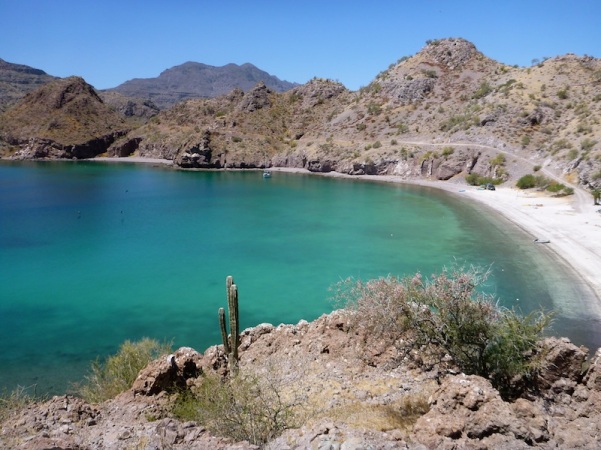 We made a run to Agua Verde for a night, then a longer 50-mile run down the San Jose Channel to a favorite anchorage on the southern side of Isla San Francisco. Along the way we were treated to some great dolphin shows. There is nothing that makes us smile more than when we get to sit on the bow with our dolphin friends riding our wake, and jumping and leaping for joy in front of the boat!

Dolphins on the bow!

Isla San Francisco is one of the most popular anchorages around La Paz, which is why we were surprised to be the only boat in the bay when we arrived! That soon changed of course, but we could sure tell that the season was winding down since there were so few cruisers around. We spent a few days enjoying swimming, hiking, agate collecting, beach walking and snorkeling around Isla San Francisco, and watching the boats come and go.

We also celebrated McMartyManDay in Isla San Francisco.  Chicken enchiladas and carrot cake…how else can I say I love you to the man who I adore?  We walked over to the other side of the island where the beach is rocky instead of sandy and there are a zillion agates.  Birthday agates, carrot cake WITH cream cheese frosting, and a walk across the salt ponds…ah, a perfect birthday!

Walking across the salt flats. 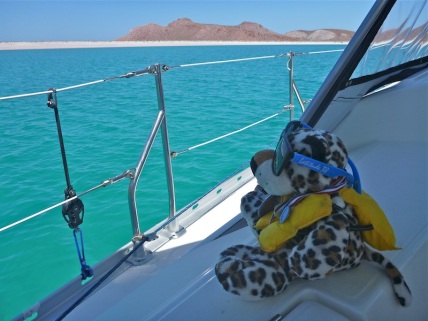 From Isla San Francisco we sailed down to Caleta Partida where we are now. When we rounded the point we were again pleasantly surprised at how few boats were in the anchorage and we even scored the primo anchoring spot just inside the tip of the western corner of the bay. The winds tend to funnel through Caleta Partida and the bay opens to the west, so by anchoring just behind this small finger of rock we were protected from most of the westerly wave action making for a quieter stay.

Our week in Caleta Partida has been filled with lots of laziness and reading in the shade along with a different excursion every day in the lulls between the morning easterly and evening westerly. One day we paddle boarded to the beach and walked from one end to the other laughing at the gazillions of fiddler crabs on the beach. We saw a huge jack rabbit bounding up the slope, and watched the hummingbirds zipping all over. Another day we kayaked out to the reef, one of my favorite snorkeling places that once again didn’t disappoint with lots of different types of fishies swimming all around me. 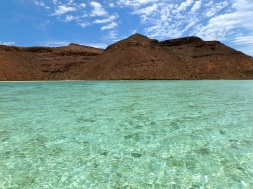 The crystal waters in Caleta Partida 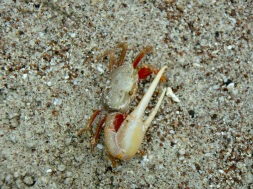 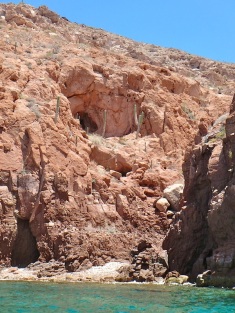 Blue footed boobys on the nest

On another day’s paddleboard trip we headed out into the middle of the bay and found ourselves in amongst three huge turtles! They let us come quite close and just kept their heads up watching us. What a treat that was, we’d never seen them so close before.

I ventured part way up a canyon trail one day and was treated to a completely different side of the crater. It’s so quiet when you get away from the water, and then you start to hear all the songbirds and the rustles in the dry leaves. A chipmunk with some sort of nut or fruit popped out in front of me, then led me up the steep rocky trail a ways. I kept looking for another jack rabbit but only saw the little piles of pellets; evidence that he’d been this way before. The views from high up are awesome as you can see the water depths and different colors. It was pretty amazing to see Happy Dance all by herself in the huge bay. What a treat!

Flowers in the desert 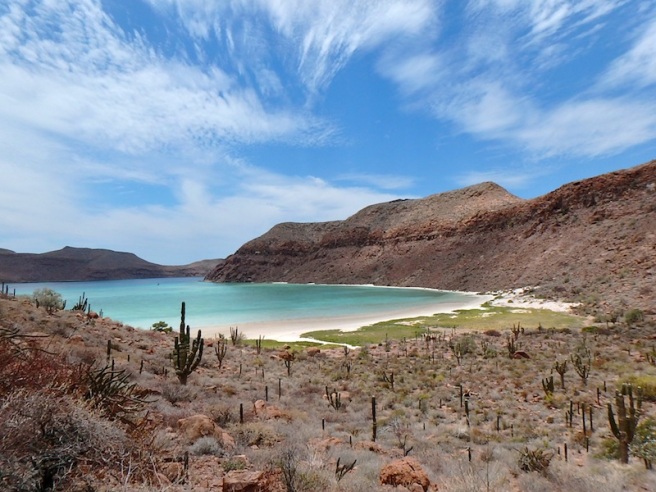 The view of Caleta Partida – the black dot is Happy Dance!

Our last night at anchor was a blustery one, with rolling thunder in the distance and a few rain squalls passing through. We were treated to a full rainbow stretching across the bay as the sun went down. It was the perfect ending to a perfect week.  Now it’s time to weigh anchor and head into the big city. 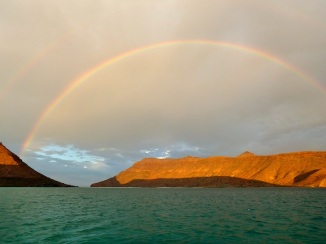 Tomorrow we’ll be having our coffee in our slip in Marina de La Paz, where Happy Dance will stay for the next few months. We’ve always avoided La Paz since it seems like there is some sort of evil vortex pulling the cruisers in…you can check out but you can never leave.  It’s a little scary, but we’ll make sure to keep the dock lines loose so that we can escape when it’s time.  In the mean time we’re looking forward to getting to know the area a bit, enjoying the local cuisine, and meeting some new friends. We’ll keep you posted on what we learn with our morning coffee in the cockpit!

Amazing rocks on the beach!

Another tough day at the office…

One thought on “Morning Coffee”