We’re cruisers. Our home is where the anchor drops, so it’s essential that the hook holds us firmly to terra firma. It always makes for a good start to the day when you wake up in the same spot as where you went to sleep!

There are as many opinions about what makes the perfect ground tackle as there are boats in the sea, so I won’t bore you with all the selection sentiments. Happy Dance weighs between 24,000 and 25,000 pounds depending on how full the liquor locker is at any given time. Plus, we have a fair amount of windage from our 48″ high hull, two furled headsails, paddleboards on the rail, and full cockpit Bimini, so all that added together can make for some pretty high loads on our anchoring system.

There are all types of calculations that go into determining those loads; a roller furled headsail is said to add 10 percent more windage; the further the boat turns in the wind the more load is added based on the greater surface area of the hull and structure. Wind loading increases with the square of wind velocity, so that a 20-knot puff will have four times the force of a 10-knot puff (10 x 10 = 100, 20 x 20 = 400), and sea state adds to shock loading on the anchor system as the bow bounces up and down in the swell. All that being said, we are extremely happy with our 53-pound Rocna anchor and 300′ of 5/8″ chain. We also carry a secondary plow anchor with chain and rope rode, and a Fortress stern anchor for those narrow anchorages or when we want to keep our bow into the swell.

After choosing an anchor, then there is the process of dumping it overboard and making it stick. As with the oodles of opinions on what is the best anchor, there are also many methods on how to drop the hook. However, the one fundamental rule of etiquette in anchoring is that first come, first served. If boats swing together it is the fault of the vessel that anchored later.

Some of our best afternoon entertainment has been while sitting in the cockpit with our beverage of choice and watching the fleet come in and anchor. There are the “drop and drive” types who let the anchor drop while steaming in and simply drive over it until it sets, causing the boat to stop suddenly and bounce back (that has to be tough on the gear). There are the screamers who yell instructions between bow and stern for the entire anchorage to hear. One time a captain was even using the hailer to call instructions to his wife/girlfriend/first mate, and another time we heard a comment yelled back from the helm, “honey, I know where reverse is but where is backwards?”! Then there are the boats that simply can’t be alone and have to snug up next to another boat even where there are miles of empty anchoring spots in a bay.  And of course the all time favorites are the powerboats with big anchors, little brains, and lots of noisy toys. It all makes for some amusing and sometimes annoying anchoring antics!

Last night was no exception, as the fleet began arriving in order to hunker down for what was forecast to be a blowsy night with winds in the mid 30’s. When we’d arrived the day before it was fairly calm, a pair of humpbacks greeted us, and the few boats in the bay all had their pointy ends pointing east. Since we’d set the hook along with the rest of the boats in an easterly directly, we chose to re-anchor closer to shore and to give us room for additional rode (the chain that holds you to the anchor; more rode = less pull on anchor) for the predicted heavy northwest winds. By mid-afternoon there were 13 sailboats happily bobbing in the breeze, all playing nice with each other, hunkered down for the blow and allowing plenty of swing room between vessels. 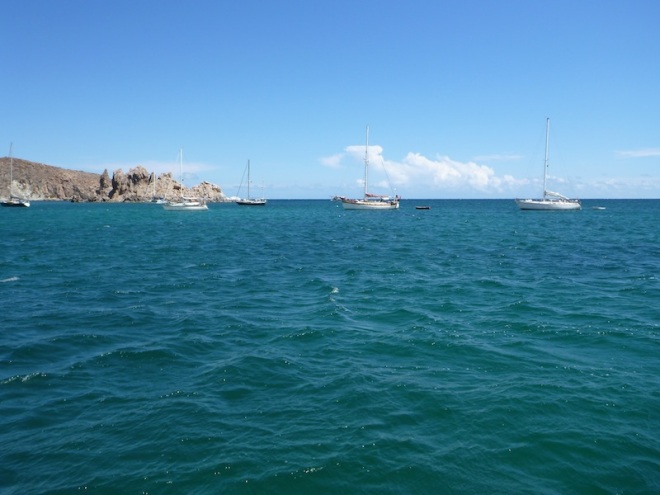 It seems to be a standard theme that the last boat in is either the big honking power boat with music blaring or it’s that guy who heads for the smallest hole and drops their hook without checking surrounding depths or boat angles. True to form, a 45′ heavy homemade sailboat came in late heading straight for us through a field of boats, and anchored between the 9′ shallows and Happy Dance. We’d met the owner before, we’d even had dinner with him and gave him a couple of beers, so we hailed him when he dropped anchor and tried to let him know where our anchor was (since he was anchoring in a different direction than we had). That either didn’t register or he didn’t hear, as he simply ignored us.

While our new neighbor was anchoring he had dropped his hook so that our anchors were at an angle to each other in relation to where our boats lay. This shouldn’t have presented a problem except that as the wind shifted, the angles, our varied swing patterns, and different length of rode caused Happy Dance to slowly drift down toward the new boat. In other words, we were getting close enough to see how many ice cubes were in their drinks.

Before dark and before the big winds arrived, we called over to remind him where our anchor was located and that we felt we might be too close given the forecast, to which he replied; “your anchor shouldn’t be there”. With that parting shot, for which we had no reply other than, “huh?”, he weighed anchor and was on the move. Thinking he would re-anchor on the other side of us in the perfect spot under the cliffs and out of the direct wind we were feeling relieved. But no, that wasn’t his plan. Instead he motored up to where we’d just told him our anchor lay and dropped his! Marty tried to hail him on the VHF to no avail, and when the captain hollered over that “you can’t have the whole f@#%ing bay”, we figured there really wasn’t any point in talking anyway. We considered moving, but it was now nearly dark and we decided to wait and see, knowing that we had more rode out than he did and that hopefully we would stay behind him.

It was soon pitch black, with the wind blowing in the high 20’s and gusting in the 30’s. It was a blowsy, bumpy night, but thankfully a fairly short wind event. There was lightning in the distance, howling gusts running down from the hills, and even a rain shower or two. All the boats stayed put, and even our etiquette challenged friend kept his distance.  We had sundowners the next night with our other close neighbors and learned that they too were concerned about the proximity of this one unfriendly boat.  We’ll remember to stay clear of him in the future!

We’ve had fun with anchors before. Once while anchored outside Cabo San Lucas a boat had anchored at night with his anchor line crossed over ours, so his boat was drifting down on us in the morning because the wind had shifted. We advised him of the potential for his boat to swing into us based on where our anchor was in relation to his, and with that he replied; “this ain’t my first rodeo”, and hopped into his dinghy to go to town! When we saw him return a couple of hours later we breathed a sigh of relief until he left again without correcting the anchor issue. We were essentially held captive since we couldn’t raise our anchor until he did, so we had started setting out the fenders to protect Happy Dance from an expected collision when we saw the owner heading back to the boat in his dinghy. He dove on his anchor to see the situation that apparently made him a believer as he then quickly weighed anchor and headed into the marina without so much as a sorry or so-long!

Marty says that I’m overly cautious about most things on the boat, and anchoring is definitely one of those areas where I totally agree. My quality of sleep seems to be in direct proportion to the amount of rode and swing room that we have when at anchor. There is always that part of my brain that holds the escape plan, the plan B, the “oh s#@t”! I like to know where the water ends and the bumpy part begins. I like to know which boats are near and what direction they’ll go if they slide. It’s all just part of taking care of our home, our Happy Dance, and of course, each other.

So as we sit here bouncing on the waves, watching the hills rotate around us, and listening to the wind sing in the shrouds, I have to say I love our anchor. I love the sight of it dug deep in the sand. I love the security of plenty of rode laid flat on the sea floor. And I love our Happy Dance. Tomorrow it will be calm and the toys will be off the deck for us to paddle and play, but today we hunker down and thank our lucky stars for another day in paradise – even a blowsy one.