Okay, I admit it; I’m tired of wind. It’s a fickle kind of feeling because I love the wind at sea, but not so much at anchor! At the moment we are anchored in 18′ of water in Bahia San Pedro and Happy Dance is jitterbugging as if she’s in the dance contest finals. The gusts go from zero to mid-twenties, which isn’t all that blowsy in the great scheme of things, but when a wall of wind at 25 knots hits a movable object, that object tends to move in a very uncomfortable way! So yes, I admit it; I want to be tied to a dock! So how did we get here? Read on…!

When the North winds decided to start blowing out of the South, it was time to leave Bahia San Pedro and head up to Bahia Las Cocinas (the kitchens).  It was a nice sail, and we were traveling dead downwind so we decided to try sailing wing on wing.  The wind was perfect and even though the seas were a bit roll-y (can’t tell from the photo), it was a great sail.  At one point we got the silly idea that Marty should get in the dinghy and take a photo of Happy Dance.  Well, it was easy getting him out there, but getting him back was another story entirely.  It’s hard to pull in a dinghy when you’re traveling at 6 knots and the waves are fighting you.  I was a bit worried he was going to end up in the drink, but luckily he made it back onboard so we didn’t have to have a MOB drill!

Marty in the dinghy..

We spent 8 nights in Bahia Las Cocinas, 25nm north of San Carlos on the mainland side of the Sea of Cortez. For most of our visit we were the only boat in the bay and it was total seclusion. Occasionally a fishing trawler would rumble by in the distance, or the Pangueros would zip past with a friendly wave as they headed up the coast, but for the most part the bay was ours. And what a bay it was.

The water in Las Cocinas is some of the clearest we’ve seen in the Sea of Cortez. We explored the nooks and crannies of the rocky shoreline, doing some jigging for dinner (no catching, just jigging!) and some “dinghy snorkeling” where we just hover over the reefs and watch the fish from the dinghy. At one point we found a place where I had to jump in to take a closer look. It was like being in an aquarium. Large schools of fish swam unafraid all around me, a large mobula ray moved stealthily below me flapping his giant black wings. The larger fish kept an eye on me and one even kept stopping to look right at me. With the water so clear, the sunlight made vivid patterns on the greens of the different seaweeds that swayed back and forth with the waves. The colors, the variety, and the numbers of fish were mind-boggling.

Another day we explored the beach and walked up a dirt road to see where it led. As soon as you leave the beach behind, the temperature rises about 20 degrees (okay maybe not, but it felt like it!). We walked up to the top of a hill that looked back at the bay where Happy Dance was floating peacefully. And low and behold, a sign! Yep, a roadside marker out in the middle of nowhere, displaying a plat map of a planned development, complete with a bazillion houses, a marina, and a golf course. Holy guacamole, there goes the neighborhood.

Happy Dance in the kitchen

The anchorage is open to the north and the low saddle of land to the south doesn’t provide a perfect shelter, but for most of our stay the southerly winds blew just hard enough to keep things cooled off. It was perfect to swim in those gin-colored waters, listen to the fish and rays jumping, and watch the pelicans and boobies dive for dinner. Toward the end of our stay we knew to expect a day of stronger winds out of the south, but that day turned into two days of hunkering down waiting for the winds to abate, and we started to think about finding a new hidey-hole.

The day we chose to leave was forecast for light winds out of the SE, and we were headed in a SW direction but, as we’ve come to expect, the forecast was slightly off. We pulled anchor with a gentle breeze in the bay and some white caps starting to appear in the Sea. Once we rounded the point and headed south, the “light winds” built fast and hard and we were soon bashing into square breaking waves and going straight into SW winds blowing 20 plus. Not exactly what we had in mind for our easy morning jaunt down to Bahia San Pedro!

With only 14 miles to travel, we certainly could have kept going, but the conditions were uncomfortable and the waves were pushing our speed down to below 4 knots so our planned 2-hour trip was now going to be more like 4 hours bashing into a noserly. Ugh. Since we really didn’t have any need to leave Las Cocinas, we decided to turn around and try it again in a day or two. Ain’t retirement grand? No schedules.

When doing a 180, the drastic change in conditions from wonky waves to gentle following seas is always surprising. As you begin the turn the sail piles up more power even as you ease it out, and when the boat is abeam to the wind and waves there is a moment that the boat heels into the trough making everything feel very out of control and then suddenly you’re through the turn, running with the wind. With the stern to the wind you barely feel it blowing and the rough seas become gentle; lifting the boat and letting it surf down the backs of the waves. Making 7 knots downwind we got back to our little slice of paradise in no time and soon had the anchor set once again.

With the change in plans I decided that a long walk was in order. I hopped on my paddleboard, and headed to the beach. Taking the dirt road in the other direction this time, I was treated to a landside tour of the gazillion tiny rocky coves along this portion of the coast. Walking in the desert away from the beach it’s amazing how you’re engulfed by complete quiet. There are the occasional birdcalls, and the clicks of the dry branches blowing in the breeze, but for the most part it is utterly and eerily silent. The red rocks sounded hollow as I scrabbled across in my flip-flops, and the critter holes dug into the sand everywhere made me wonder whose head might appear as I crossed over their homes. At one point I startled a small hawk type bird that screeched at me as he flew away, giving my heart a bit of a pitter-pat!  I followed a trail to a tiny little cove protected from the sea swell by beautiful red rocks and went for a swim from my own private beach. It was awesome to float in perfectly still water, listening to the waves crash at the cove entrance. 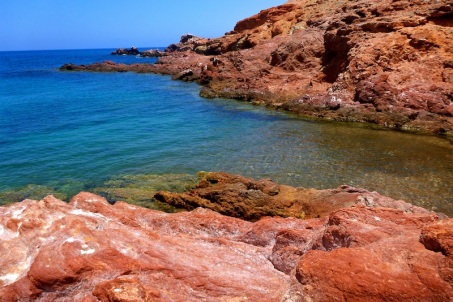 Flowers in the desert 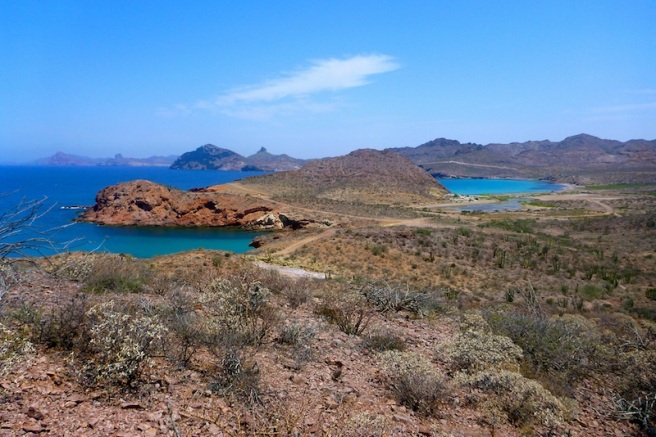 Chubasco! In our cruiser’s guidebook, there is an entire page dedicated to the various names given to the wonky winds that occur in the Sea of Cortez. A chubasco is defined as “a violent, but short-lived squall, usually accompanied by thunder, lightning, rain and strong winds.” Yep, that about covers it.

We awoke to find our calm bay had been replaced by a washing machine going full-bore. The rinse cycle was on, with the rain coming down in buckets. Lightning was flashing all around us, which in a sense was a good thing because in the pitch-black moonless sky we had no idea which direction we were pointing or where the reef was. When the lightning lit the bay we could see that the winds were coming out of the east, which meant that it was coming offshore, phew! There’s nothing worse than a nighttime storm that blows you onto a lee shore. We knew we had a good anchor set, so with all the hatches closed and toys tied down, we went back to bed to ride out the storm. It was one of the wilder ones we’ve seen mainly because in addition to the strong winds we were also getting drenched by heavy rain (free boat wash!!) along with an incredible lightning and thunder show. We must have been right in the path of the storm because when we talked to some other cruisers who had been anchored a few miles south of us they said they’d only gotten a little rain and the lightning was north of them – over us! Thankfully the storm was short-lived and we were soon able to relax and get some sleep.

We got under way early the next morning to motor down to Bahia San Pedro before another day of “noserlies” began. The plan is to spend our last few days of the season here before taking Happy Dance to San Carlos where she’ll be docked for a few months while we sail up in the Pacific Northwest this summer. However one more of these rigging rattling, hull heeling, hold on to your coffee cup gusts may just send me over the edge and begging to go tie to a dock.  The spot we chose to anchor is protected in theory from the SE winds, but the swell is wrapping around the point and the winds are swirling in every direction making it a bit of a bumpy ride.  Here comes another one, hang on!

2 thoughts on “The Kitchens and the Laundry Room!”