Of all the sailing terms there is one that seems most apropos; “beating to windward”. When the wind is dead on your nose and the waves are rolling down against you, there are two options. Either bash your way straight into the wind and water, or sail many miles off course in order to make a mile or two in the direction you want to go, because in a sailboat there are actually times when it seems you just can’t get there from here!

Sailing the goose (not beating to windward for once!) 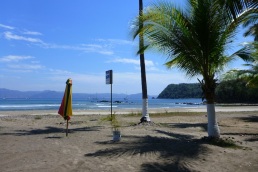 The palapa is closed today.. 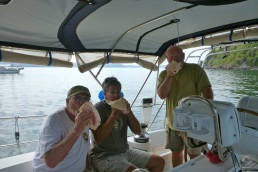 It’s spring, and we’re south of where we want to be, so that means we either bash north or wait for the southerlies to blow. We’ve done a little of both, most recently choosing to motor sail on our 15-hour trip from Barra to La Cruz with a “noserly” all the way, using a tightly sheeted mainsail along with our iron genny to push our way through the waves and stay close on the wind while maintaining the heading we wanted. Occasionally the waves got too steep and we had to veer farther off the wind, since Happy Dance doesn’t like to pound straight over steep rollers. We hate the sound of the slap of the hull followed by a shudder all through the boat when we land hard after getting too much air under us taking a wave straight on. Altering course to keep the waves on the forward quarter gives a much smoother ride and keeps Happy Dance and her crew happier.

As we rounded Cabo Corrientes (the Cape of Currents) we hoped to have the wind abeam since we were changing course by 50 degrees, but the wind just followed us around the corner and stayed on the nose. We may have to change Happy Dance’s name to Wind Magnet. We motored into the La Cruz anchorage just before midnight and tip toed through the sleeping fleet. It was a challenge to figure out which lights were onshore and which lights were boats (not to mention the boats without any lights on, but that’s another story). We finally found a spot to drop anchor and were soon safely in our bunk enjoying a good night’s sleep.

Our next push will be a 60 hour run across the southern edge of the Sea of Cortez as we make our way over to the Baja side from the mainland. We’re eager to get going, but having made this passage five times both in good and bad conditions, we’ll wait for the right winds. Waiting has its own rewards too, as I sit here watching another pink sunrise listening to the terns and frigates overhead, enjoying the calm before the tourists wake up and start playing dodge boat in their jet skis.

While waiting for southerlies, we took a sojourn north and landed in Las Vegas for Marty’s annual pilgrimage to pay homage to all that is baseball. It’s also a time of brotherly bonding, donating a few pesos to the casinos, people watching in the world’s most bizarre playground, and for Katie and me; spa day! Marty, Meg and I went to see a bunch of dummies (not the ones in the baseball draft room) along with Jeff Dunham; belly laughs for two hours! As the saying goes, “a good time was had by all”. 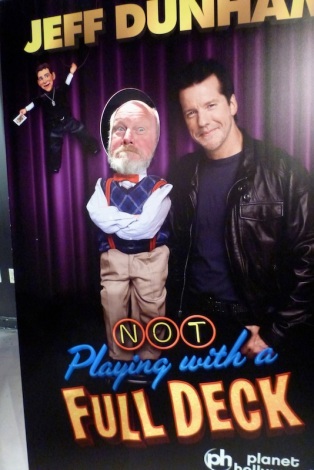 Another mode of travel that we enjoyed while on terra firma was our annual E-tkt ride on steroids, compliments of my brother Bob. My brother is a car aficionado, rebuilding magnificent American dreams from the 60’s, and he knows how to drive them too. Heading down the straightaway at 100+ miles per hour, he calmly says to me, “this is where the brakes failed on me on my first run”. Thankfully, he knows brakes too, and installed brand new ones in the Cayman so that we wouldn’t land in the dirt. I’m proud to say that this year I wasn’t scared! (Last year I had to pry my hand off the handle before I could get out..ha!) 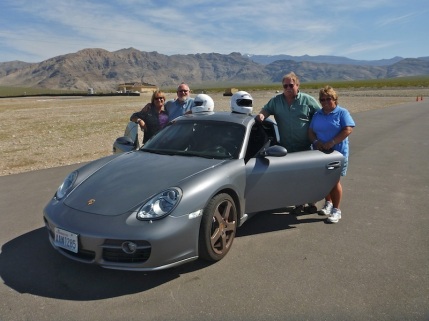 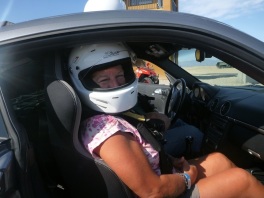 As we flew over Happy Dance on our approach to Manzanillo airport we saw huge bands of red tide stretching out into the ocean. It’s been in every bay we’ve entered from Barra de Navidad north to La Cruz where we are now. The water is thick with reddish brown algae, so no swimming for this crew. It just makes us all the more eager to get north into the Sea and enjoy that clear water. We’ll be leaving at the first opportunity!

As a footnote, we should mention that we’ve passed another milestone on our travels – it’s been two years since we untied the dock lines and set sail.  In Roman times milestones were a series of stones placed every mile along a road to show the distance to a far off place and mileage was measured from the Golden Milestone, located in the center of ancient Rome.

For Marty and I, milestones have become a symbol of dreams fulfilled; a time or place that we can look back on where before there had only been a vague idea. Our mileage is measured not only in lines on a chart or in looking back at the path of our wake, but also in the colors of the water, the feel of the wind, and the movement of the stars as they spin around Polaris.

Two years ago when we left the dock in Anacortes we had no idea of what an incredible voyage we were beginning.  Since then we’ve celebrated many milestones, and have put more than 7,600 nautical miles (8,700 statute miles*) under the keel as we’ve traveled up and down the west coast from Alaska to Mexico. We’ll soon be adding another 300 nautical miles as we head back to Baja, to the Sea of Cortez, an area we’ve grown to love. Come on southerlies! 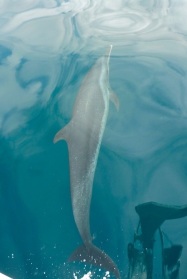 One of our many visitors on the passage

To convert from nautical to statute miles: the factor 1.15 may be used, but it is approximate.

One thought on “Sojourns and Southerlies”