I love stories with happy endings, don’t you?  There’s a familiar saying that cruising is “working on your boat in exotic locations” and Marty has been fulfilling that adage for the past two days.  Today we are pleased to report a happy ending and that the current boat problem has been found and fixed (don’t tell Murphy)!

So here’s the gist of it.  In making our final checks as we prepare to leave the dock, Marty decided to run the generator for a bit…but rutro…it wouldn’t start!  He checked all the obvious things and quickly determined that it was going to require some disassembly.  Our generator is a Northern Lights 6.5 kw built-in, and it is located in a compartment on the stern of the boat, which doesn’t lend itself to easy access especially now that we have one of the arms of the Hydrovane blocking the door into the compartment.  To get to it requires some boat yoga on the swim step and usually means something or someone may go splash!*

The first day of general boatiness fixes included fuel checks since the sound of the generator starting up sounded as if it was being starved for fuel.  Marty bled the line and made sure there was plenty of fuel at the generator itself, then at a suggestion from Steve on Delphinia…yeah Steve!…he checked the fuel filter at the Racor.  It turns out we had a 2 micron filter there, so Marty replaced it with a new 10 micron to allow for easier fuel flow to the generator.  Our fuel tanks are about 12′ from the generator so it has always seemed like it took some extra umph to get the fuel flowing.

After a couple of hours of fun with fuel, the generator would start up just fine, but then when releasing the shutdown bypass button, it would shut itself off immediately.  It seemed to be a heat issue at this point so the next step was to check the oil and fluids.  Long story short – all was good there, but the generator still wouldn’t stay running.

By this time it was apparent that Marty was going to need to actually get into the generator compartment to check the impeller on the water intake, so that meant we needed to turn the boat around in the slip.  But alas, it was beer-thirty and the Seahawks were playing on Monday Night Football down at Hammerheads, so work had to stop for the day.

Next morning bright and early we turned the boat (nice job Sue!), and Marty had more fun taking all the toys off the stern.  With access to the generator he was able to replace the impeller, check the oil, and make sure all the other bells and whistles were ready to go.  We started the generator up again and it sounded good, getting plenty of fuel, but we couldn’t hear any water running through the hoses to cool the generator.  We quickly shut it down so as not to destroy the new impeller and Marty got ready to take a swim.

On Happy Dance the water outflow from the generator is under the boat, so it’s not instantly apparent whether water is flowing to the generator.  Marty swam under the boat (ugh..marina water!) to check the entry and exit points for the water on the hull and they were clear.  Now it was time to pull the hoses and see if there was a blockage.

It’s always the little things!  Marty undid the hose at the intake through hull, and found that the little flapper on the back flow preventer was stuck in the closed position.  It’s supposed to open and close with the water pressure, but this one wasn’t moving.  It came off really easy though, so with the hoses back on we started up the generator once again, and voila!  Water was flowing, and the generator stayed running…yippeee!

The flapper that didn’t flap! 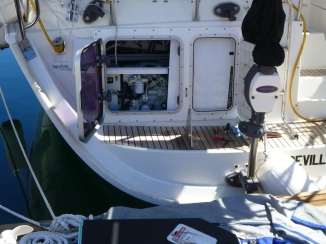 Now that the boat is back together, we are finishing up our final checks and plan to leave the marina tomorrow!  It’s been nice in San Carlos and I definitely recommend it as a great hurricane hole.  We were lucky to only feel a sting from hurricane Odile and hurricane Simon completely fizzled out before heading inland further north.

Our home in San Carlos

Looking out to the Sea

Sunset from the dock

The winds and seas look great for our trek across the sea tomorrow night, so we’ll be getting up at 0-dark thirty, pouring some coffee down our throats and heading out.  Next stop, somewhere over on Baja.  We’ll be harbor hopping our way down the coast of Baja for the next 3 weeks before making the crossing back over to the mainland side.  Our next long stay will be in La Cruz where we plan to arrive the first week of November and stay through Christmas.  Hasta la vista baby!

*P.S., Only one socket bounced into the locker and one hobbit went splash (on purpose) on this project!  We retrieved the hobbit, but the socket is lost to the dark hole under the generator.

2 thoughts on “It’s the little things…”