Sin City is a very strange place.  We tried to come up with a single adjective to describe Las Vegas (The Meadows) and decided that was pretty hard to do.  Bacchanal, excessive, phony, loud, dirty, crowded, pretentious, expensive; these all sound pretty negative, but Las Vegas is still fun – in small doses!

We spent a week there and took in many of the tourist sites, but we don’t really subscribe to the whole “party till you drop” thing!  We ate too much, saw a couple shows, enjoyed the jacuzzi, gambled a bit (and came away $140 richer!), and enjoyed some great people watching!  There are definitely a lot of characters who are wanting to be seen.  At last count I think we saw 12 Elvi (plural for Elvis), 5 wannabe showgirls, 7 transformers, 8 Minions, a few spray painted human statues (one who swears), and a plethora of musicians including a guy who played the same drum beat for 8 or 9 hours straight.

Go Kart racing was a riot.  While the race track was nothing like the real thing we’d just experienced at my brother’s place, it was lots of fun (plus I got to drive..ha!).  Marty had the fastest lap, I had the slowest, Katie came in second and Greg was the overall winner; guess that will teach Marty not to run into the wall, eh? It was really hard work to keep the silly car on the track, and I found myself listening to Bob’s explanations of tap, tap on the brake, then accelerate to keep the back-end from coming around…or something to that effect!  It was perfect though, because it was just the four of us on the track and so I could look behind me and know when it was time to let someone go by!

That night we feasted on roast chicken, potatoes and broccoli all eaten without forks, while pounding on the table shouting HUZZAA, and cheering our king, the king of France, who ultimately won the battles of the Round Table.  The jousting was fast, the horses were gorgeous and it’s amazing how perfectly they perform in a noisy, smoky arena with LOTS of confusion all around!  Well done!

Just in case you didn’t know what a minion was (I had to look it up!)

While the boys played baseball, the girls played (or tried to) bingo! 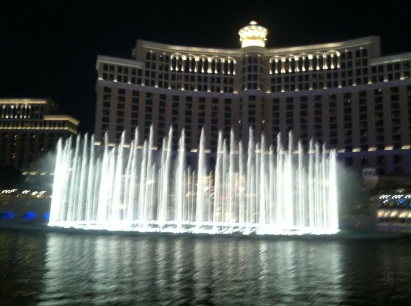 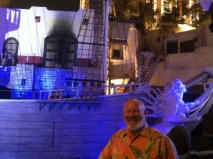 Marty and the pirate ship 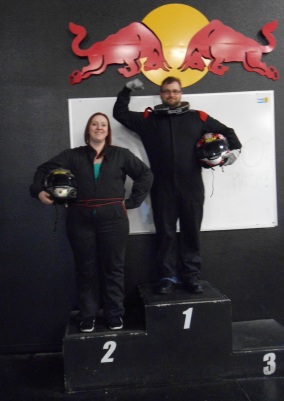 Greg is the winner

Looking up to my HB….ahhhh 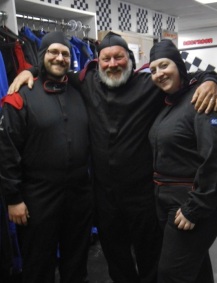 I feel the need…for speed!!! 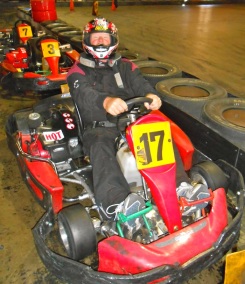 A man and his go kart…

We also throughly enjoyed the Jersey Boys show.  It’s the story of Frankie Valli and the Four Seasons.  We were surprised to hear numerous songs that we recognized, but didn’t realize had originated with them!  The songwriter, Bob Gaudio, has written so many songs that we all know and love; it was mind-boggling.  The screenplay was wild too, with a simple stage set that allowed for constant and fast changes in the midst of the show tying the dialog and the many, many great songs together perfectly.  It was a superb show and we’d highly recommend it to anyone.

The main reason for the Vegas trip was Marty’s fantasy baseball draft, an event that he and his brothers have been doing together for over 20 years with the same group of guys.  It’s quite a production and this year Greg joined in so that he can mentor with Marty, just in case we can’t get back next March.  I expect though that baseball will win out over whatever local paradise we’re in, since Marty can never get enough baseball!  That’s okay though, as all the McD’s showed up for the weekend and it was fantastic to see everyone!

It took awhile….but we finally got a photo we can keep! 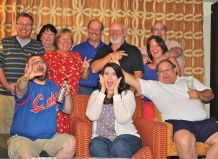 There are always a few clowns….

While the boys were locked away drafting baseball players for their teams, the girls decided to play bingo!  Turns out we’re not very good at it though.  What a riot; 5 giggling girls trying to keep up with the “caller”, who was going TOO fast!  We were each playing 6 games at once, and it’s surprisingly hard to find all the numbers before another one is called out.  To add to our angst, in the middle of number calling, the announcer would start talking about other events going on nearby, and then yak about different ways each game was played…argh!  We were so stressed that we couldn’t even order a free drink when the waitress came by…how do the 90 year olds do this!?  Needless to say, we didn’t win, but we had lots of fun.

Driving from Las Vegas to Ventura was a beautiful drive through the desert (on a horse with no name?), and then into the land of fast cars and frazzled people!  Marty and I have decided that retiring onto a sailboat requires regular injections of slothfullness (we’re retired – go around!), so driving or even walking in LA is an eye opener to say the least.  After leaving our little town of La Cruz where everyone you meet has a smile and a Buenos Dias for you, it’s strange to say hello to people who avoid your eyes, or bump into you while passing.  I have a hard time with rudeness – it’s just so unnecessary and makes everyone grumpy!  I just want to scream BE NICE!!!  🙂

Shake and rattle – no roll.  On our first night in the land of the San Adreas, we were woken by a 4.4 earthquake!  As we laid in bed listening to things rattle, I said to Marty, “Nooooo”, and he said “Yessss” (get your minds out of the gutter – we’re talking earthquakes here!).  Luckily it was a “shallow” quake so it only rattled, it didn’t roll – I’m learning so much that I might become an honorary SoCal-ian!  Now I’m feeling earthquakes everywhere; I think I’d rather have panga waves slapping against the boat to wake me up instead of feeling the earth move.

Shop till you drop.  One of our tasks while on land and surrounded by capitalist nirvana is to shop!  We have a list of strange odds and ends that are difficult if not impossible to find at the local tienda in Mexico.  Things like Keen sandals, Avon skin so soft, small plastic slide in picture frames; it’s an odd and never-ending list.

Slice and no dice.  I’m currently listening to the sweet sound of Marty snoozing on the couch.  It’s sweet because I know that he’s okay and comfy after having carpal tunnel surgery this morning.  He’s had the surgery before, so he knew what to expect and is hoping for the same level of pain and numbness relief as he found last round.  He’s got a large bandage on, and is under orders not to move his wrist for 4-5 days, so we’ll see how well he follows instructions!  I was just glad to see his smiling face after he’d woken up from the anesthesia; he’s my everything and I don’t like it when he’s in hospital garb…even though he did look cute in purple scrubs..ha!

His “poor me” badge!

So we are back at the McD Estate in Ventura, waiting on Marty to recover and enjoying the best B&B south of Coupeville.  Cindy is a gem to put up with us again, and we are more than comfy here.  It’s wonderful to be visiting all our friends and family while taking care of business.  We can’t wait to get back to Happy Dance and set sail for the Sea of Cortez, but we are having a great time on land too.

One thought on “Shake, rattle and roll!”