We must live under a galaxy of lucky stars.  Last year when we were in Isla Mujeres, the golf cart that we’d rented during our stay disappeared while we were out walking on the beach one day.  We naturally expected the worst; that we’d have to pay for a vanishing golf cart.  With long faces we took a taxi back to our hotel where we’d set up the rental, and sheepishly explained that we’d lost their golf cart…something that seemed hard to do on a small island!  Well, long story short, the nice lady behind the counter told us not to worry, that she’d make some calls.  A few hours later we answered a knock on the door, and a friendly young man told us that someone had simply borrowed our golf cart and it was now out in the parking lot.

As luck or lucky stars would have it – it happened again!  Not a golf cart this time, but our trusty dinghy, Tiny Dancer!  In case you need a refresher, we bought a brand new Achilles 9′ RIB inflatable and a new outboard motor before leaving San Diego in October.  Needless to say, it used up all of Marty’s allowance!  We loved our Tiny Dancer, it would zip up from shore to boat and back again without a complaint.  It’s our lifeline to get from anchor to shore as we travel, so it’s an important part of our lives!

The deed was done as we were anchored out in La Cruz as we’ve been for many weeks.  The wind was blowing offshore which was a little unusual for that time of day, but nothing to worry about.  We had been to town and when we came back we tied the dinghy as we always do with a clove hitch and a half hitch.  Most of the time we “hang” the dinghy on the side of the boat up out of the water to make it harder to steal and to avoid the noise from the waves slapping against it.  However this particular night we sat out in the cockpit until dark with Tiny Dancer happily bouncing around behind the boat, and we decided it would be okay to leave it out.  Bad idea.

We usually “hang” the dinghy at night for safe-keeping

Marty woke up a little after midnight from a strange dream involving putting carpet over the transom of the boat next to the engine…hmmm…too much salsa in his tacos??  Anyway, that strange dream prompted him to go out and check on the dinghy, which was GONE!  Not good.  Marty did the unhappy dance, walked around the boat to make sure I hadn’t just moved it or something, got out the spotlight to check the area, but all to no avail.  Tiny Dancer had vanished.

We spent the next day visiting the Port Capitan, Harbormaster, Marina Office, the Ministerio Publico (police) in Bucerias, and spreading the word with all the locals that we’ve met.  We rode buses, filled out papers, and spent plenty of time walking back and forth between all the offices.  Marty even got fingerprinted at the police station when we filed the theft report, which seems a little backwards since we told them we didn’t steal our own dinghy!  At any rate we did our due diligence, and came home for a cerveza and a nap.

The police office, with hand lettered sign on the door!

Marty getting finger printed by the police

That evening as we were down below making plans on how to replace our family car/dinghy, we heard a knock on the hull and a hello?  We popped out to the cockpit to find five local fishermen asking if we’d lost a dinghy!  Yep, they’d found Tiny Dancer a few miles across the bay to some rocks known as Piedras Blancas, and they had towed it back into Puerto Vallarta where their charter fishing boat is moored.  Then they had driven from Puerto Vallarta to La Cruz to find us.  We set up a time to meet them in Puerto Vallarta and they went on their way. 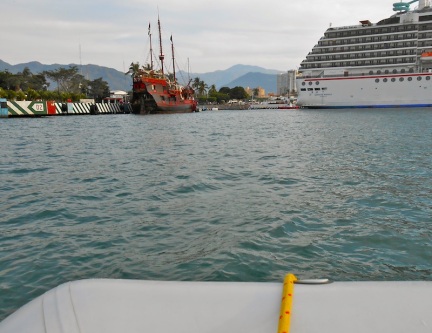 On the hunt for pirates or Habormasters 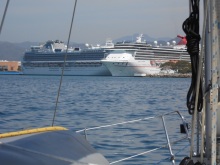 Karina II comes to pick us up

The next day we took Happy Dance over to PV, motoring the 10 miles and enjoying some whales breaching in the distance.  We pulled into Marina Vallarta, a rather rundown marina, and since we couldn’t raise anyone on the VHF radio, we simply pulled into a slip.  Once we were tied up we found an employee of the marina who called in on his walkie-talkie to get us a slip for the night.  Untie, do a U-turn, and tie back up.  Now the fun begins.

We had planned on meeting Jose and the crew of Karina II from Mike’s Fishing Charters at 5:30pm when they came back in from their daily charter.  We finally found the specific dock where they said they’d be, but no luck.  Then we saw their boat on the other side of the channel, so we called them over and they picked us up.  The outboard engine, along with all the pieces of the dinghy such as the oars, anchor, pump, etc., were in the cabin of the fishing boat and they were driving us to another slip where the dinghy was “hidden”.  All the time we’re moving around the marina they are now telling us how they could have sold the dinghy many times, and how another guy who’d lost his dinghy had to pay the Port Captain $500 to get it back..riiiiight.  We gave them 600 pesos – all the cash we had, and had wanted to give them more, but we’d been unable to transfer funds via the two ATMs we’d been to that day.  They started to get a bit testy, tying the dinghy lines to their boat and saying they needed more money.

While all this is going on we are hanging off the back of their 42′ powerboat, drifting with engines running in the center of the marina channel with boats and boat wakes going by.  Marty was in the dinghy and Jose handed him down the outboard over the railing (this is a large outboard weighing 80 some pounds)!  I’m then handing Marty all the paraphernalia from the dinghy and climbing into it too as the money conversation continues.

So, long story short, once we had everything in with us, I started untying the bowline, and Jose kept holding onto the stern line of the dinghy, saying that we had to go with them to the Harbormaster’s office.  Finally some sense of sanity prevailed and the captain of the vessel, an older gentleman, told Jose to let us go, but that we still would have to go ourselves to the Harbormaster to sign papers to get the dinghy released and we might have to pay $500.

Well, we putted around the marina looking for the Harbormaster’s office, which as it turned out was all the way back out at the entrance to the marina, next to the cruise ships.  As we pulled up to the 10 foot high cement cruise ship dock we weren’t quite sure how the heck we’d get out of the dinghy!  Then we pulled around the pirate ship (yes really…) and there was a low dock for small boats – phew!

To summarize, we can chalk one up for the good guys with a couple of caveats.  We will never really know the full story of how the dinghy came to be “lost”, in that the fuel tank was empty when we got it back.  It may have slipped off the boat, or it may have been stolen.  However, Jose and the crew did return the dinghy, when you figure they could easily made some quick cash by selling the dinghy and motor to the highest bidder.  We didn’t appreciate the final transaction and being made to feel as if we were being played, but all in all it was a positive from what would have been a huge negative for us.

We’ll take the positive from the negative and move on, counting our lucky stars that the dinghy is back onboard!

8 thoughts on “Lost and Found”