“It’s just more trees and rocks” said the sales guy at the counter in Campbell River as he rung up our purchase of charts.  He had asked where we were heading and when we told him we’d be going to Alaska for the summer, he replied that we could see the same thing around here and a lot easier.  We’ve been laughing about that one ever since and every time we come around a bend to a new vista of green hills and rocky shores above deep waters, we look at each other and chuckle….just more trees!!  🙂

This week we’ve enjoyed a bay with bears, a sound without sound, a social supper, and hopefully a crabby Craydon!  Read on…

After leaving the dock at Kwatsi Bay, where we’d enjoyed one night of hospitality and fresh baked bread, we motored up into the end of the bay to anchor.  On the way we spotted what we thought might be the same bear we’d seen the day before!  He was on a rocky point where there was a patch of lush green grass growing and he was happily munching away.  We motored over closer to watch and take a few (okay a gazillion) photos.  We just floated nearby for a bit enjoying the show as he moved around in the rocks poking his head down into nooks and crannies for some tasty treats.  After awhile he ambled off into the woods and we found a spot to anchor.

Our friendly neighbor checking out the lunch buffet

The achorage is set in a beautiful basin, surrounded by steep black granite cliffs with plenty of waterfalls rushing down created from all the recent rain.  The second day we got out the kayaks and paddled all the way around the bay, exploring the rock walls and beaches.  At one point a Mom and her ducklings swam by looking mighty peeved that I’d come so close! 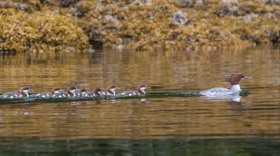 Mama and her new flock

Lest you think this is all fun and games…we do actually do “work” occasionally!  Here’s our latest rainy day project – cleaning and reorganizing the can lockers.

From Kwatsi Bay we headed up into Simoom Sound.  It’s a large sound that is created by the Wishart Pennisula on the mainland of BC.  There is a sign located on the north side of Simoom Sound and stating that the land is a reserve of the Dzawada’enuxw First Nation of the Kwakwaka’wakw peoples (try saying that three times fast!).  We went all the way back into the sound, to explore possible anchorages in McIntosh or O’Brien Bay.  We finally settled on a spot in O’Brien Bay where we could enjoy the rock outcroppings on three sides along with a nice view…of more trees..ha!

The one thing that we found so overwhelming was the total silence.  We had been in bays with lots of running water over the past weeks, and any water flowing into this bay was hidden.  At first there weren’t even any bird sounds, or any noise to break the silence and we found ourselves whispering!  In the evening we did start hearing a few birds, and lots of tiny fish jumping here and there, and of course the sound of raindrops!

We woke to sunshine and after a leisurely breakfast and hot coffee we headed out to explore in the kayaks.  The water here is so clear, especially after the other bays that we’ve been in with all the waterfalls bringing down silt from the mountains.  We were able to see down about 20 feet, to the colorful rocks and fish on the bottom.  It was still eerily quiet though, and glassy calm as we paddled around.  We set the crab pot, but it just didn’t seem like a crabby spot and we weren’t surprised to be skunked. 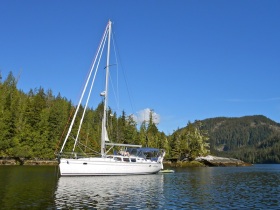 We left Simoom and headed for Sullivan Bay, a floating village on North Broughton Island.  It’s a cute little town with friendly people and we decided to stay for a couple days.  Okay, we were enticed by the 3rd night free offer, AND the fact that their restaurant opened Friday with Prime Rib night!  It had been awhile since we’ve eaten out, so we couldn’t resist!  We met some friendly folks on the dock who were heading to Portland in their Cheoylee 53, so we all enjoyed a fun and tasty dinner together.

While in Sullivan Bay boats were coming in with beautiful red snappers and halibut that they’d caught nearby, so the manager Chris, helped us out with some more information on fishing set ups and areas to try.  We put on the recommended lures and headed out to catch dinner!  Neither of us know the first thing about fishing so it was pretty funny when we actually caught one!  The hootchie that I had on my line seemed to be a big hit, and I reeled in 4 fish!  The first one was a small halibut that we threw back, but the next three were good sized rockfish!  Our first fish dinner will be yummy.

Goin’ fishin’! Sullivan Bay is in the background. 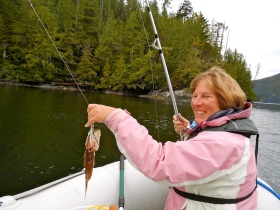 Caught one! (we threw this little halibut back..)

Saturday morning we woke to rain (seems like mornings are always gray and then it clears up later in the day).  We headed up to Claydon Bay, which is supposed to be a nice anchorage with good crabbing.  Since we’ll be away from internet the rest of this week, we will let you know about Claydon in our next post.  For now we’ll look for sunny skies and “more trees”!  🙂 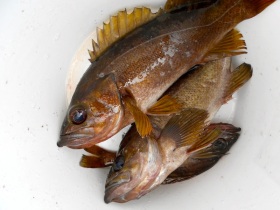 Rockfish for dinner anyone? 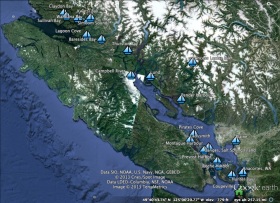