It’s hard to believe that we’ve already been cruising for two months and living aboard for six months.  It all seems so normal now, as if we’ve been doing this forever.  As I’m writing this, I’m listening to a roaring waterfall, looking up at black granite cliffs and snow covered mountains; too cool.  As Marty has been saying lately; “it’s the little things”.  We seem to be slowing down, simplifying, and becoming more aware of all the small details around us.  I guess it’s the old cliche of “taking time to smell the roses”.

Tribune Channel in the rain

So, what have we done this week?  Listened to the rain, watched the rain, rowed around in the rain, pulled the crab trap in the rain, (fill in the blank) – in the rain!  Did I mention that it’s been raining?  🙂  We’ve had quite a wet week, but there have been a few bursts of sunshine in between the clouds, so it’s still bear-able (we’ll get to the bears in a minute). When the wind picks up and starts blowing the rain sideways, we just roll down the panels on the cockpit enclosure so that we have a dry area where we can still enjoy the scenery.  Then when the wind dies we roll the panels back up to watch the rain on the water and the mist moving along the trees on the cliffs.  It’s a win-win!

In terms of distance traveled this week, it’s been minimal.  After our first 500 miles of getting to the Broughtons we decided to slow the pace down a bit, and explore this area.  We spent our first three nights in Lagoon Cove, enjoying the company of Pat and Bob and watching the swallows zipping around the dock.  We also enjoyed our first grizzly sighting, or a “brown” as the locals call them.  This particular grizzly was quite young and skinny, probably recently out of hibernation.  He was walking the beach at low tide, about 30 feet from the dock that paralleled the shore.  I ran (moved quickly and quietly..ha) to tell Marty and to get my camera.  We followed the grizzly down the dock, watching him turn over large rocks as if they were pebbles, to get to the little crabs and worms hiding underneath.  These rocks would have taken you and me two hands and much umph-ing to turn over!  Anyway, it was a fun sighting and even though it was too dark for good photos, you can see how big a young hungry grizzly looks! 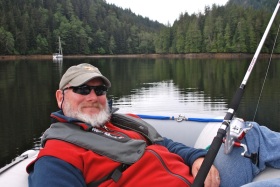 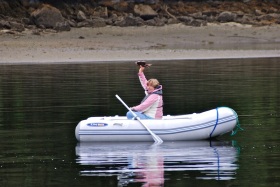 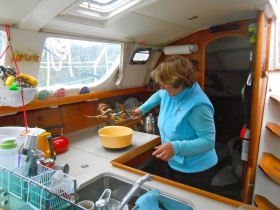 After leaving Lagoon Cove we headed up Tribune Channel to Wahkana Bay.  We spent a couple of peaceful days in Wahkana, with the bay all to ourselves.  We rowed around in the bay enjoying moments of sunshine between the rain showers, investigating the shoreline and streams, looking for bears, and watching our resident eagle (who was watching us!).  We caught 5 large Dungeness crabs and cooked them up – YUM!  Made a couple of good meals and snacks out of them – Crab Louie, Crab with cheese and crackers, Crab Pasta…ahh!

When it came time to pull the anchor we had a moment of “oh sh*t”.  Due to the depth we had almost 200′ of chain out, and when we turned on the windlass (the electric winch that pulls the anchor), there was no light, no action, nobody home….RUT RO!!!  After pulling the entire 200′ of 3/8″ chain, and a 55 pound anchor by HAND…(think sweat, grunts, and “how much more?”), we motored over to Kwatsi Bay, just 5 or so miles away.  We noticed that the engine gauges on the instrument panel weren’t functioning either, so we were racking our brains to figure out the common denominator as we motored along.

As we pulled into tiny Kwatsi Bay Marina, Max the owner met us at the dock to take the lines.  We then realized that the engine shut off wasn’t working either – good thing we had learned all our new engine start/stop tricks!  Marty opened the engine compartment and turned off the engine manually.  Okay, so we’re here, let’s see if the engine will start again!  Marty starts her up and after it’s started he turns the key back to vertical.  I say, why did you do that?  I always leave the key set to the right, so that the gauges work….and poof….the light bulb comes on. The key!!!

I usually start the engine when we’re getting underway and Marty usually does the lines and anchor prep.  On this occasion Marty had started the engine and then set the key in a different position, which was equivalent to turning off the accessories in a car.  So, we checked all the gauges and the windlass, and voila, everything works fine when the key is in the angled position!  While it was a tough lesson learned, it’s one I doubt we’ll forget! 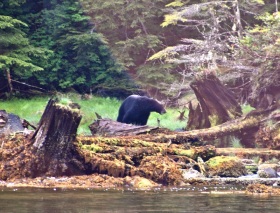 We did get a few bonuses though, by coming into Kwatsi Bay.  The tastiest; Max brought us a loaf of fresh baked bread, still warm from the oven…what a treat!!!   The noisiest:  The huge water fall that we hiked into.  The coolest: Bear #4 on the beach behind the marina, at the EXACT spot where we had been only an hour or so earlier when we hiked into the falls….!

So here we are on a rainy, gray morning, about to leave the dock and head further into Kwatsi Bay to anchor for the night.  This is a beautiful little bay with towering black granite cliffs and a number of noisy waterfalls.  We’ll set the crab trap and maybe put out the prawn trap, and call it a day.  Tomorrow…who knows…we’ll probably head over to Simoom Sound and check that out…!  It must be time for a status meeting – decisions to be made!  🙂

One thought on “Week 9 – Lagoon Cove to Kwatsi Bay”