Hello from West Maui as we continue the run through the GREAT (Grand Retirement Escapade And Tour)!! It has been a few days since the last post so thought I would bring you up to date as to this leg of the tour and the last couple of days in Panama.
After hunting down the elusive quetzal and blue morph butterflies in Boquete, Panama, we finally packed up and headed our rental car back to the bustling “metropolis” of David where we caught a flight to the true Metropolis of Bustle, Panama City! Wow, what a difference; night and day, as we went from a town in the mountains at about 3000 feet elevation to the big city with towers that were about the same height! We flew into the Albrook Airport which is the domestic airport near the Panama Canal and could see a large number of vessels waiting their turn for a trip through the canal. From there, we jumped in a taxi to take us to a hotel near the International Airport; about $33 away. Another WOW! as we navigated the alley ways, by ways, one ways, and a whole bunch of other ways on the Corridor Norte (North Corridor), the Corridor Sur (that would be in the opposite direction!), downtown streets, and highways along the water, through 3 toll booths eventually arriving at the hotel. We checked in and stayed in! I think we were both in a daze! We did watch the USA vs. Panama soccer match where the US won 1-0.
So we rested and got ready for the next day which, as it turned out, was a good decision! Up at the butt-crack of dawn to take the shuttle to the airport as we were flying standby to Dallas… or Miami… or somewhere in the states! Fortunately, we were able to get on the flight to DFW and sat in the bulkhead row just behind first class. Good placement since we would be trying to catch a flight from DFW to LA, so being near the front put us ahead in the race through Customs & Immigration! We flew through there with no problem, and actually made it to an earlier flight to LA; where we sat in the bulkhead row on a 767 (Row 10). However, one of our bags ended up in Row 22. Who designed those silly little stowbins over the center rows? Not much good for anything other than a small purse! Anyway, we got to LA early (Yeah American Airlines!!) where we were able to amble over a few gates and get on a flight to Maui… in the bulkhead row! I guess I should also mention that we have been traveling this whole time with a backpack and a roller bag each and that sitting in the bulkhead row means you cannot place your backpack under the seat in front of you because, well, it’s a wall!
Sue had started making calls while in LA to find us a place to stay (don’t you just love living on the edge?!) and found, not only a place to stay but a shuttle as well! So when we got to Maui at 8 in the evening Hawaii time; we were able to grab our bags and go stand outside and wait for the driver… and wait… and wait. It actually wasn’t that lengthy of a wait but we had been up since 5 AM… New York time! But all is well that ends well and we checked in to the Lahaina Shores for a couple of days to await the arrival of my big bro Ron and his wife Cindy! (Married 39 years as of a couple of months ago! My heroes!!)
This is turning out to be a catch up blog and all of the above was just a way to set up that we went whale watching yesterday… not just once, but twice!! And so now we can get to some pictures!!! I’ll skip the part about the macadamia nut pancakes, Mai Tais, and POG champagne for now and save that for another blog because the whales were AWESOME!!! 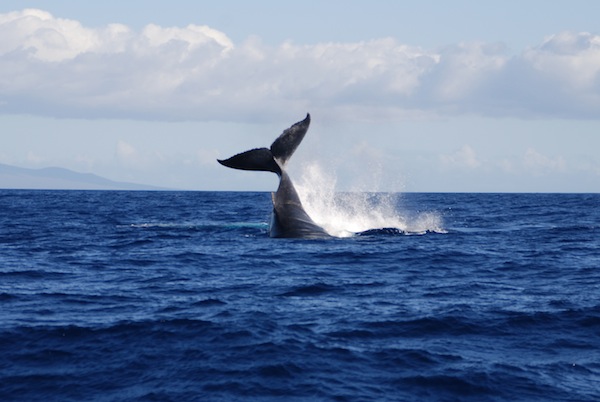 We went out on what is called a “raft”, but is really a 40 foot rubber dinghy designed especially for the Whale Foundation of which Ron & Cindy are Members. A great, fast way to see the whales and, boy were they active! Sue and I had been able to see them from shore as they frolicked around in the channel between Maui and Lanai; counting 7 tail slaps in a row at one point. However, being in the raft and getting up close to these fellow mammals was truly exhilarating! Breaches, tail slaps, pectoral fin slaps, arching tails as they slid under the water, sometimes in unison! As I mentioned; totally awesome!! 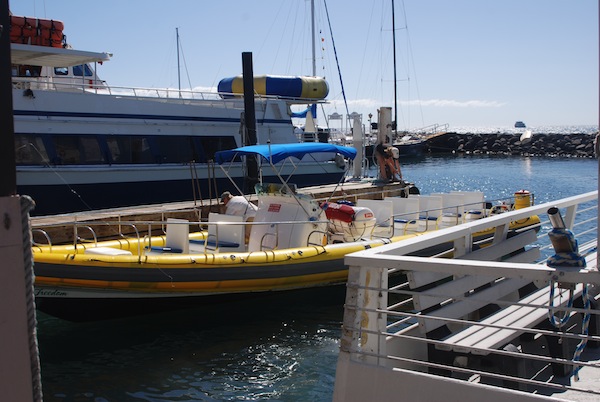 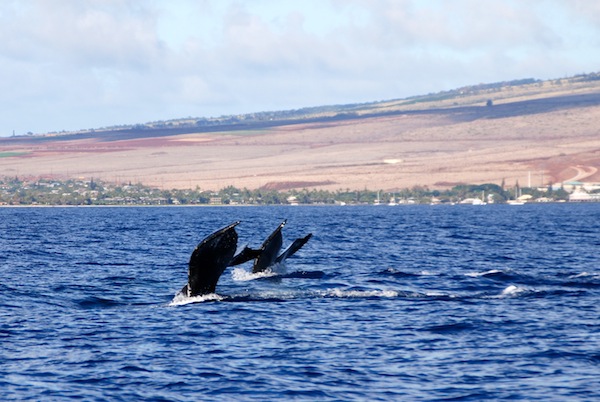 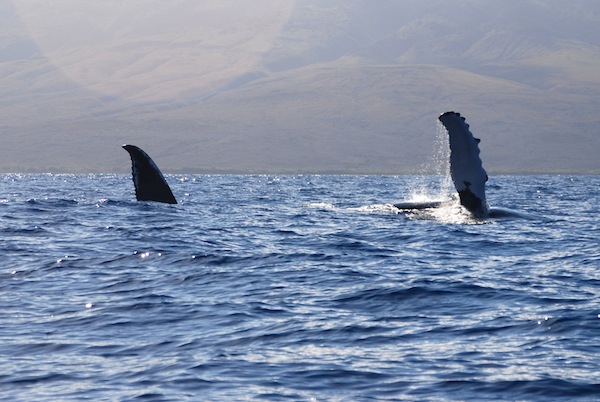 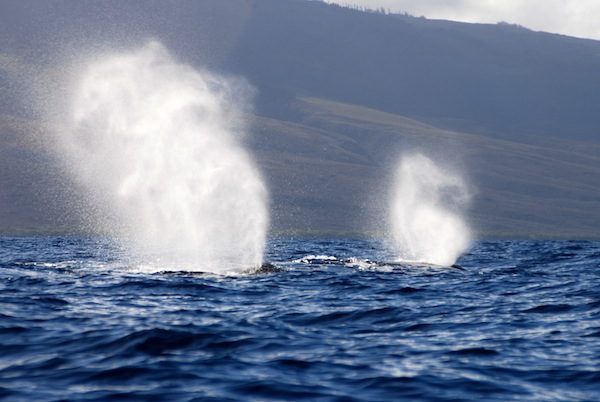 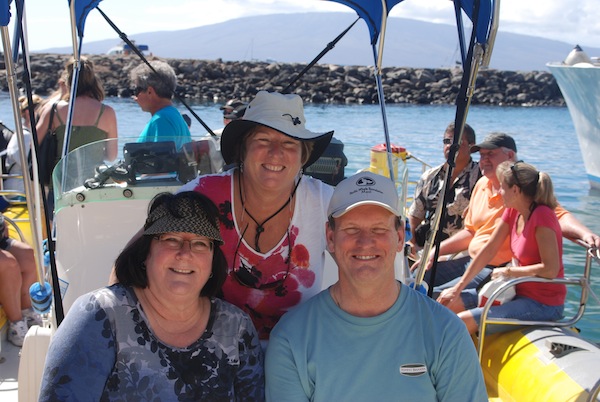 Sue, Cindy & Ron before we left the dock... the FIRST time! 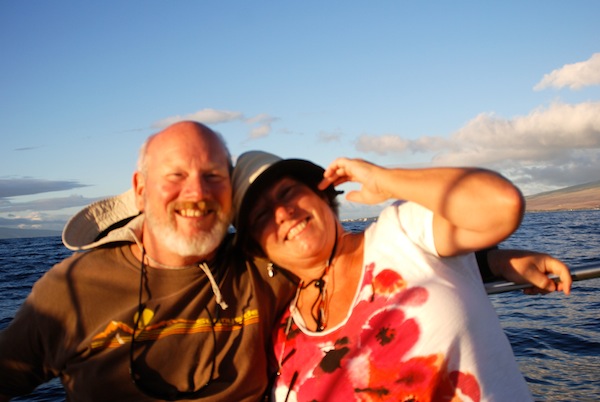 Whales!... and they weren't looking at me!

We had signed up for a 2 hour tour and ended up staying on the boat for another 2 hour tour (Membership has its privileges!!) that ended with a gorgeous sunset. All in all a great, fabulous, amazing, stupendous, totally tubular and gnarly day out on the water. 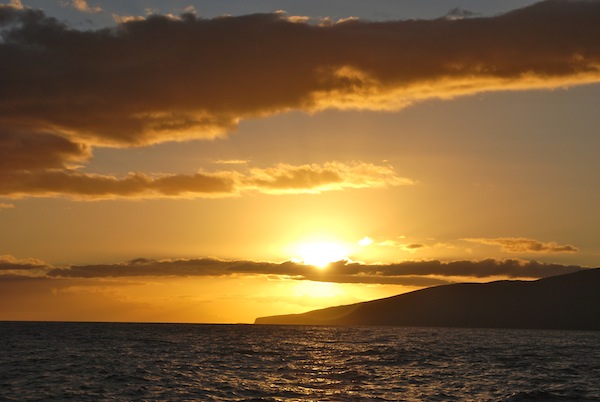