Being from the Seattle area, we are very used to the rain and have made the appropriate adjustments to living with the webbing between our toes as well as dealing with the nearly constant drizzle and occasional shower. We were also aware that the rainy season in Bocas is December and January and considered to be the worst part of the year to visit… and that’s one of the reasons we came now was to see how bad, bad can be.
We found out yesterday while we were out exploring Isla Caranero, the island closest to Bocas. We had just had breakfast in town at the El Pirate (you know that’s MY kind of place!), the sun was shining and we made a quick decision to take a water taxi over to check out a marina we could see from this side. 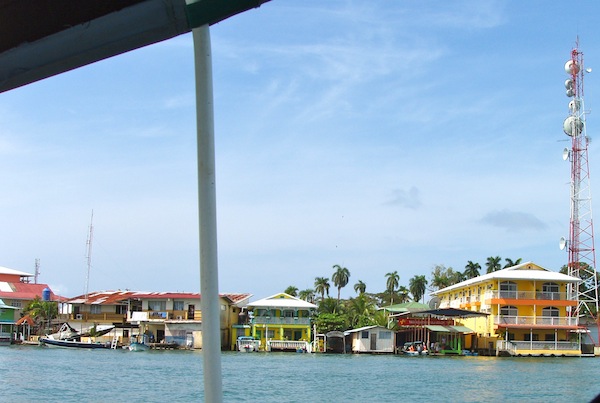 Looking back at Bocas on our way to Isla Caranero

$1 for both of us and we were standing on a rotten dock wondering how to get to the marina that we could see; but every path we could see was under water from the rains the night before or non-existant. We ended up going the opposite way expecting to find a path back through the hovels towards the marina but the only paved sidewalk led into a church and a dead end. We continued our march along the “beaten” path before finally succumbing to the heat and stopped for an adult beverage. While sitting there watching the world go by; a boy came by selling tamales for $1.50… it was good and filling and had chicken in it, including the bone!
We asked how to get to the marina and found our way back to where we had started and asked another boy how to get to the marina (that we could see; but no clear cut path to it). After slogging through the water and the mud we finally made it to the marina and checked it out… all 25 slips. Not sure I would put my boat in there!
But here is where it starts to get interesting! From the marina we could see another restaurant/cantina nearby that was colorful and I recognized from some travel pictures from a friend. Off we go to the Careening Cay Cabins and Cosmic Crab Cantina! What a joy! After the disrepair of the local housing and slogging through the mud and water, the paths were clear, the air smelled of flowers, the cabins are cute and painted, and the Cosmic Crab sits out over the water on stilts… verrrry inviting! 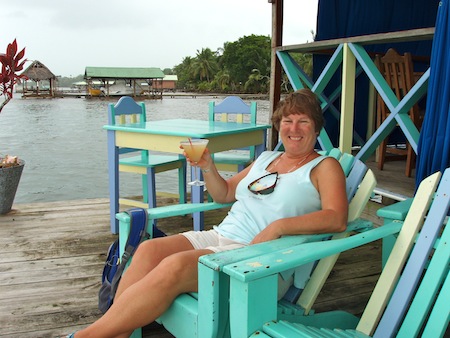 Just another day in Paradise!

We met the owners, Steve and Joan, and Edwin mixed a couple of great margaritas! We were sitting there feeling on top of the world when a squall started coming in with just a few drops at first. We moved to a covered location and it was a good thing because in the next few minutes the main part of the storm came through, the skies opened up, the the rain became torrential and we had a blast laughing and taking pictures, watching the water taxis ply their trade and poor Edwin finally started using his umbrella to walk the 10 feet from one covered area to the next. All in all a great place to be when the “sky dam” breaks! 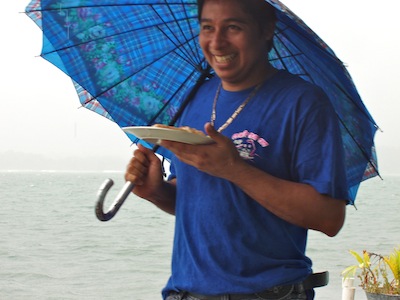 It was only 10-15 feet but he definitely needed the umbrella!

And a few more pictures of our rain “shower”!! 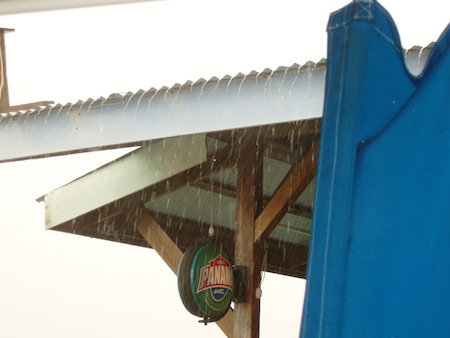 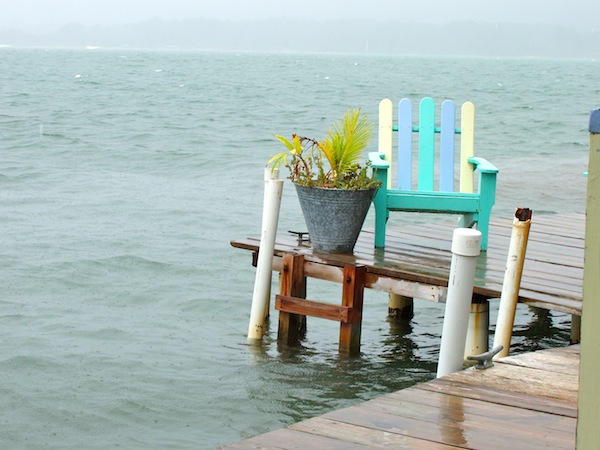 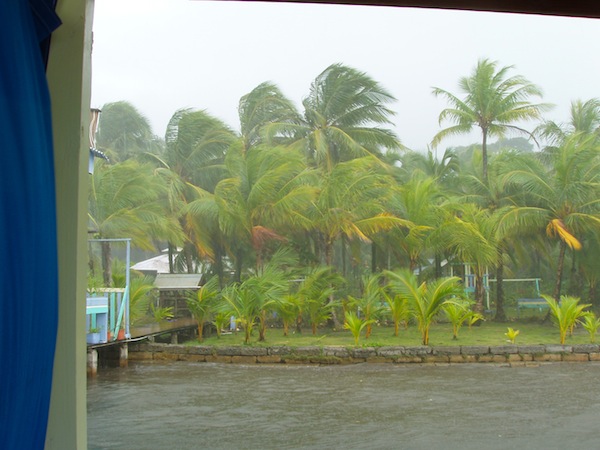 Looking back at Careening Cay Resort from our lunch spot

The locals just step under the eaves and wait for things to calm down or just throw up their umbrella and continue on. I wish I had a picture of the locals riding their bicycles in the rain with their umbrella and a big smile! Yep! It rains here but just like in Western Washington it keeps everything green!… And it’s a warm rain! I think we can handle the “bad” weather.
Enjoy the holidays!!
Marty & Sue
48.218706 -122.686409

One thought on “Rainy Season”